An open letter to President Obama on British sovereignty, democracy, and the EU Referendum

Welcome to the United Kingdom: we hope you enjoy your last official visit to our shores as Head of State. But we also strongly recommend that, while renewing your acquaintance with our own Head of State, you reflect on the immeasurable historical importance, to both our countries, of independent nation-state sovereign democracy: and then conclude that for you to intervene politically in our forthcoming EU Referendum would traduce both our countries’ past histories, not to mention our own current hospitality, and in a way we find entirely unacceptable. 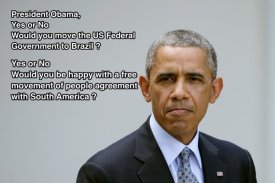 You’re going to try and browbeat us, Mr President, into voting to remain in the EU: in a democratically deficient, supranational political union that you would never even dare recommend to your own fellow-Americans as a political institution into which they should subjugate themselves.

We’ll return to the specifics of that particular piece of hypocrisy later: but you also evidently propose to compound the hypocrisy by pretending that your intervention has our own best interests at heart.

We’re not fooled. We’re well aware that, in governmental, political and diplomatic circles, the so-called Special Relationship is often a platitude thrown by the unscrupulous to the masses to conceal that the United States resolutely and sometimes ruthlessly acts in what it perceives as its own interests, even to the detriment of its own allies’.

We accept that, however, as being no less than how a major power should defend what it sees as its interests – but what we do not and will not accept is your pretence that a grossly-disadvantageous political arrangement for us is somehow in our interest, because it primarily serves your own.

We have a long institutional memory, Mr President. We know how, in the aftermath of World War II, America took advantage of our precarious financial state to insist on the return to convertibility of sterling, thus allowing the dollar to supplant it as the primary currency in large parts of the world.

We know how, to help promote your predecessors’ then already-incipient preference for a pan-European political union, US Marshall Plan funds were lavished on the fascist and collaborationist states whom we had sacrificed so much blood and treasure to help defeat, while we in Britain struggled to rebuild our own infrastructure and society via loans extended by America on unfavourable terms.

We know how the US threatened to destroy sterling by selling all its sterling reserves during the Suez Crisis of 1956, in order to supplant British influence in the Middle East with its own via a strategy of supporting Arab nationalism.

We know how the 1960s débacle over the aborted Skybolt nuclear weapons delivery system revealed your State Department’s making it an arm of US foreign policy that Britain must be in the (then) EEC, whatever the cost to it economically or democratically, because that was key to US interests.

More recently, Mr President, we’re well aware you have been, not merely the most Britain-unfriendly POTUS in modern history, but also arguably one of those most antipathetic to wider Western interests. 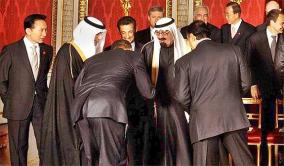 We know you have near-humiliated yourself and your country in making obsequious obeisance to the autocratic Wahhabist-Salafist rulers of a Saudi Arabia that funds Jihadism, executes apostates and jails dissenters. Indeed, you arrive in Britain fresh from abasing yourself to a Saudi Arabia that now threatens to inflict enormous damage on your economy if currently classified material exposing its complicity in 9/11 is revealed.

We know you have sanctioned a path to the development of nuclear weapons by an Iran that makes no attempt to conceal what it sees as its theocratically-mandated destiny to eliminate a democratic nation-state from the face of the earth and extirpate its people, while in the interim hanging young men from cranes in public for being gay. 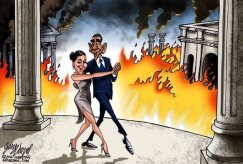 We’re also aware that, as recently as last month, even as people fought for their lives and Brussels reeled in shock from violent terrorism  – perpetrated by the supremacist religio-totalitarian Islamist ideology that you apparently cannot even bring yourself to name – you were tango-ing the night away in Buenos Aires, canoodling up to an Argentinian regime that still maintains its egregiously-tenuous claim to a British sovereign territory, over 90% of whose British inhabitants declare, via self-determination referendum, their overwhelming wish to remain British. The satirical cartoons captured it so perfectly, didn’t they?

So please don’t insult our intelligence, Mr President, by pretending your impending “advice”, that it’s essential for Britain’s interests for it to remain in the EU, is merely the counsel of a friend who has only our own best interests at heart. We know full well that that is not the case: only 4% of us think it even might be, as opposed to 51% who are under no illusions that US wishes, not British interests, are uppermost in your motivations. You are, in short, no friend of Britain.

Now consider the European Union you are assuring us that it would disastrous for us to leave, were it to be translated into the American sphere.

Are you prepared to tell Americans they’d have a safer and more secure future, if only they’d agree to give up their independence, sovereignty and representative democracy to submerge themselves in a new supranational political union including Mexico, Nicaragua, Venezuela, Guatemala and Paraguay, which was determined to arrogate ever-increasing powers to itself from the democratically-elected national governments of its component nation-states, as an inexorable process of creating one single pan-American superstate?

Are you prepared to tell Americans they’d be far better off in such a pan-American political union whose highest judicial authority was a court in Bolivia, consisting mainly of academic lawyers unfamiliar with American common-law traditions, but which would nevertheless be superior to, and override, your own Supreme Court?

Are you prepared to tell Americans it would be much more to their advantage to immerse themselves in a political union of which one of the cornerstones was the totally free movement of people between the 30+ states from Alaska to Tierra del Fuego, with entitlements to generous welfare in their destination country, despite massive economic disparities between them?

Are you prepared to tell Americans it would be so much better for them, in such a political union, for 70% of their laws to be made by an unelected, bureaucratic, corrupt, unaccountable, viscerally anti-democratic Pan-American Commission in Bogota, whose commissioners they weren’t allowed to elect and certainly not vote out, but to which they nonetheless had to send $80 million a day for the privilege?

Actually, Mr President, we already know the answer to these questions: you would never suggest to Americans any such thing, because they have already indicated that no more than a third, at most, would support anything remotely like the political settlement to which you  insist disingenuously it is in our own best interests to remain shackled. So until you are prepared to recommend Americans to give up their sovereign democracy to the kind of polity you wish to see continued to be imposed on us, we respectfully suggest that you butt out of our Referendum. Interestingly, over 100 of our own elected lawmakers seem to agree.

At the core of our EU Referendum, standing way above all issues of economics, trade or migration, is one very simple principle, but one whose incontestable, absolute necessity for government by democratic consent it is impossible to over-state: that the laws governing the citizens of a discrete-demos polity can legitimately be those, and only those, made by, and only by, the representatives directly elected by the citizens of that polity, and whom they can remove from office via the ballot-box at the next election.

The founding fathers of the great nation whose elected leader you, Mr President, will thankfully soon no longer be, considered these principles to be of such paramount importance that they and thousands of their fellow-patriots in the Thirteen Colonies were prepared to sacrifice their own lives to secure them for themselves and their future descendants. So much so that, in a few weeks’ time, on the Fourth Of July, you will celebrate the 240th anniversary of their final success in gaining their independence from a distant imperial power determined to keep its subjects in subjugation.

That you now come to us, to seek for your own interests to persuade us not to take this opportunity to recover self-government on these immutable principles for ourselves, from the 21st century equivalent of that distant imperial power determined to keep its subjects in subjugation, we find nothing short of grotesque.

We respectfully suggest, Mr President, that you abandon your plans to intervene in our democratic referendum. Perhaps you could profitably use the time to make a second and final visit to your new apparently ideological near-soulmate Fidel Castro, before the old tyrant is summoned to account by the Grim Reaper.  Or possibly to work on your golf technique, which looks as though it could use some improvement.

Your advice on our vote to decide our future EU destiny is not needed.

7 thoughts on “Your Advice Is Not Required, Mr President”