The Brexit Movement, prematurely wound down after the EU Referendum, needs re-creating to continue making the case for it, so as to keep pressure on the Government to deliver it.

Note: this is the long (and updated) version of an article first published at The Conservative Woman on Friday 17th November 2017.

Like many ConWom readers, I suspect, I spent the early dawn hours of Friday 24 June 2016 in a state of ecstatic semi-euphoria that the British people had ignored the pro-EU hectoring of the massed ranks of the New Establishment and their globalist backers, and had voted to leave the EU. It didn’t last very long.

Such was the furious reaction of the Remainer-Elites and their compliant media courtiers to their unexpected defeat that, before the day was out, I’d become convinced that while we had won the Referendum battle, we certainly hadn’t yet won the war, and that the celebrations of some, on the assumption that all that was needed to achieve Brexit had been done, were hubristic and perilously premature.

I even tweeted as much, as this selection from my Twitter timeline between early that Friday morning and late that evening shows (with apologies for the profanities…) 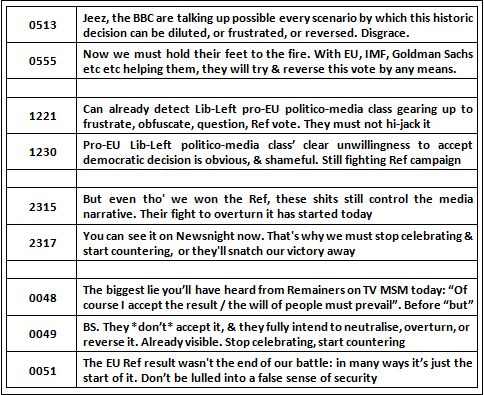 But sadly, this is precisely what happened after the Referendum. The Vote Leave campaign wound down: its principal Conservative politicians dived headlong into the internecine strife within their party from which its Remainers emerged predominant, while its successful CEO, Matthew Elliott, decamped to the Legatum Institute.

On the Leave-EU side of the Brexit movement, an insufferably bombastic and complacent Nigel Farage resigned as leader of UKIP to forge a new career in the media as the man who won the Brexit that hasn’t occurred yet. UKIP meanwhile has collapsed into virtual irrelevance after the two most credible replacements were seen off by the residual Farageistes, is now led by a non-entity, and is near-invisible.

A couple of pro-Brexit campaign groups persist, but active mainly on social-media only. One of them, connected to the Leave-EU movement, has a website where it’s comparatively rare that the space taken up by the text of a blogpost actually exceeds the space taken up by images accompanying it.

In effect, the loose coalition that delivered that historic vote by 17.4 million people to retrieve their sovereign nation-state popular democracy from supranational unaccountable-elite technocracy, and the communications infrastructure that made it possible, has all but dissolved.

It’s this article’s contention that this has been a catastrophic error: that developments,  not only since the Referendum generally but specificially more recently, are placing Brexit in ever-greater jeopardy: and that the Brexit movement needs to be re-constituted and go back on to a war footing, to fight for what the British people voted for, and even contest if need be the second referendum which I personally believe to be the Unreconciled Remainers’ end-objective.

Although the Leave coalition subsided, the Remain campaign never ceased. Unlike Vote Leave and Leave-EU, the pro-Remain Open Britain campaign has never wound down, and continues to make the anti-Brexit case.

It intensified once again during the Gina Miller litigation designed to facilitate a majority pro-Remain House of Commons vetoing the Government’s Article 50 notification. But it lessened somewhat after Parliament voted by 494 votes to 122 to authorise the triggering of Article 50 by 31st March, and matters reached a sort of uneasy equilibrium.

But then came May’s ill-advised, mismanaged General Election. When she and the Conservatives were returned drastically weakened, the Continuity-Remain movement was re-invigorated and its political, civil service, media, academic and judicial channels have visibly stepped up their campaigning by several levels of magnitude. They’re making the running: they look increasingly confident that Brexit really can be stopped and the Referendum reversed, and a majority-Remain Government seems at best half-hearted in response.

Now the fight is intensifying even more with the tortuous passage through Parliament of the EU Withdrawal Bill. The parties of the pro-EU Left have made clear their intention to conduct a guerilla war against it, voting against even the clause setting out its overall purpose, aided by 15 or more Unreconciled-Remainer rebels on the Tory back benches, some with considerably less honourable motivations than others.

In passing, let’s dismiss the disingenuous platitudes so many of these utter about wishing to do no more than “improve” the Bill. In many cases, it’s self-serving cant. They want to keep us in the Single Market and Customs Union, and under the jurisdiction of the European Court of Justice,  not out of genuine concern for our post-Brexit trade prospects or the position of UK-resident EU nationals, but to engineer either a Brexit-in-name-only, or one which is so close to EU membership that re-joining would seem like a logical step.

Many remain unreconstructed supporters of the EU Project and Britain’s submersion in it. It’s long been clear that, for them, the prime attraction of EU membership lies in is its very anti-democracy: it enables them to put as much policy-making and as many decisions as possible beyond the reach of what they see as the capricious domestic democratic process and an electorate whose views they by-and-large do not share and for whom they harbour a visceral contempt. 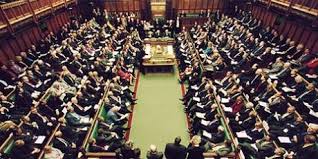 If some of the amendments being proposed already seem very technical and legalistic, be prepared: worse is yet to come. In this very detailed long-read published on 12th November at Brexit Central, Professor David Campbell of Lancaster University sets out how the legislative process of Brexit could become almost impenetrably bogged down in the morass of a quasi-constitutional conflict over the supremacy of the Judiciary, or Parliament.

It doesn’t look impossible that it could establish the supremacy of the Judiciary over that of Parliament. Just think what that would do to the prospects of Brexit happening at all. That partly explains, in my view why such an ardent anti-Brexiteer as Labour’s Keir Starmer is so keen to maintain the jurisdiction in post-Brexit Britain of the European Court of Justice.

Professor Campbell concludes that we may need an Assertion Of Parliamentary Sovereignty Act to make Brexit tamper-proof from judicial-activist usurpation of the powers of Parliament to implement the express instruction of the electorate.

If the EU Withdrawal Bill is set to have a rocky passage through Parliament, imagine how difficult it would be for a minority Government to push legislation, whose effect would be to prevent the pro-Remain Judiciary from blocking Brexit on constitutional grounds, through a marginally pro-Remain Commons and a majority pro-Remain despite unelected Lords.

Another potential complication emerged on 14th November, with a European Court of Justice ruling that EU citizens who become British do not lose the right to bring a non-EU spouse from a non-EU country to live with them in the UK. The continuing post-Brexit application of ECJ human-rights rulings is figuring strongly in debate on the EU Withdrawal Bill, so this is a further area where continued pro-Brexit advocacy is lacking.

May herself arguably opened a new front in the anti-Brexit campaign with her speech to the Lord Mayor’s Banquet on Monday 13th November. Yes, it is possible to interpret her remarks on Russian interference in Western elections as a desperate ploy to divert attention from her domestic travails: but it’s also possible to interpret it as a fresh attempt to de-legitimise by association the entire Brexit vote, especially the evening before the EU Withdrawal Bill was re-introduced into Parliament, with every prospect of the Unreconciled Remainers on her own back benches determined to vote it down on any pretext?

The signs are ominous. The EU is refusing to move on to talks about a post-Brexit trade relationship unless its exorbitant financial demands are agreed. Each UK concession on these is banked, not reciprocated, and met with merely a request for a larger sum. On 20th November, it even had the temerity to demand in effect an EU veto on UK domestic tax, environmental and business-regulatory policy after Britain has left the EU.

Its intransigence is being encouraged by a UK media overwhelmingly hostile to Brexit and resolved to paint it in the worst possible light. Sir Humphrey, for whom Britain’s EU membership has been axiomatic for 40 years and thinks Brexit a monumental folly of crude populism-appeasement, is dragging his feet.

The Government is being forced by its weakness and wafer-thin, DUP-dependent, majority into unwanted concessions. It’s conceding votes in Parliament on aspects of Brexit which, with the clear instruction delivered by the Referendum result, should no longer be in play at all. In these circumstances, that it might, to win a crucial vote, concede a second Referendum, either on the terms of our exit, or even on the decision itself to leave, can’t in my view be ruled out.

If that comes about, the Remainers will have achieved what has been their prime objective – and also the EU’s, for it has an unsavoury record of ignoring plebiscites with unwelcome outcomes and requiring electorates to vote again and again until they come up with the “right” answer.

And then what? Unlike Vote Leave and Leave-EU, the pro-Remain Open Britain campaign has never wound down, and continues to make the anti-Brexit case. Continuity-Remain could gear-up for a second EU Referendum comparatively quickly. The money would come flooding in.

It’s victory, though, would be far from a foregone conclusion. Since June 2016, the electorate has seen the EU moving faster towards ever-greater integration and centralisation in ways the Remainers denied were even being contemplated. It’s seen how so many of the scaremongering predictions of Project Fear failed to materialise. A second Referendum could be won with another Leave vote.

But not without a campaign organisation. Even without a second Referendum, Brexit feels in enough danger to justify the reconstitution of the Leave coalition, if only to continue to make the case it made so effectively in the first half of 2016, and hold the Government’s feet to the fire. The Brexit movement needs to be re-created.

One thought on “We Must Re-Create The Brexit Movement”