It’s hardly surprising that Parler is suddenly growing markedly in popularity as an alternative to Twitter in micro-blogging.  Here’s why.

To anyone active on political social-media, the increasing frustration and anger in recent months at Big-Tech’s more and more overt censorship, in various forms, of conservative, classical-liberal and libertarian opinion should come as no surprise.

It’s been there in subtle ways ever since the 2016 votes for Brexit and Trump.  But it’s in the last three months or so that the acceleration of Twitter in particular into a cesspit of predominantly Remainer, Left and Woke grievance and vituperation seems to have exploded, especially with our own December 2019 election, COVID-19, the imminence of full and final Brexit, and the explosion of hard-Left Black Lives Matter/Antifa violent protest.

To give just a few of the more prominent examples, Twitter has taken upon itself to start what it disingenuously describes as ‘fact-checking’ Trump tweets which are political rhetoric or opinion rather than factual; but it doesn’t do the same to his political opponents.  It’s permanently banned, among others,  Father Ted creator Graham Linehan for tweeting ‘Men aren’t women’; but the militant trans agenda gets a free pass.

Earlier this year Twitter suspended Tory backbench MP Sir Bill Cash, who has been involved with David Keighley of News-Watch on a judicial review of the BBC’s adherence to the impartiality requirements of its Charter.  No reason was given for the suspension, imposed for allegedly ‘violating Twitter’s rules’, although the platform refused to say which rules had allegedly been violated or how. (The suspension has since been lifted.)

For the record, I find some of Trump’s tweets counter-productively crass, and I’ve never been a particular fan of the Linehan who has a record of bullying people he disagrees with on Twitter anyway; so there was a fleeting touch of schadenfreude at him being hoist with his own petard when Twitter suspended him.

But whether one agrees or disagrees with the political opinions of all three is immaterial.  The real test of our belief in free speech is whether we uphold and defend it, not just for the people and speech we do agree with, but also for the people and speech we don’t agree with.  On that criterion, Twitter’s actions against Trump, Linehan and Cash were not only authoritarian and illiberal in their own right; they were moreover hypocritical and biased, in that it indulges and tolerates equally questionable speech from their opponents.

Nor is the censorship confined to prominent people.  Small-C conservative, classical-liberal or libertarian tweeters report being subjected to straightforward follower attrition, the more insidious shadowbanning whereby Twitter seems to restrict the reach of accounts and make them hard to find, and artificial lowering of the number of Retweets or Likes on tweets popular with their followership.

When at least 54 people have apparently Liked a tweet you posted, but the thought-police at Twitter want you to think that only 20 have. . . . pic.twitter.com/3ZXzJCbAS9

Personally, Twitter relieved me of about 1,000 followers almost overnight in late 2018 for reasons that were, and remain, unclear.  Since then, my rate of follower acquisition has been a fraction of what it was before that reduction, and I’ve now lost count of the Direct Messages from people telling me that Twitter had arbitrarily unfollowed them from me so that my tweets just disappeared from their feeds, and that it had been very hard for them to find me again in order to re-follow.

Below are the monthly changes in my own followership over the past 15 months.  Notice the abrupt change in the last three months, just as concerns about Twitter’s flagrant left-bias seem to have really accelerated exponentially?

The fascinating metrics from the analytics, though, are that visits to the account’s profile are roughly 20% down (because it’s being made difficult to find?), while the number of engagements/impressions is substantially up.

Twitter also seems to be promoting left-viewpoint tweets up the order on subject or hashtag searches, too. Although I’m no fan of Boris Johnson or his ‘Conservative’ Party, this is especially noticeable on major set-pieces like Prime Minister’s Questions or a significant speech or intervention by a conservative politician.

If you want an example of just why @Parler is taking off as both a viable and preferable alternative platform to Twitter, just look at the predominance of puerile left-wing bile under the #borisjohnsonspeech hashtag.

Then, just in recent days, Twitter has taken its Woke speech-control to a whole new level, issuing the following edict on the forms of NewSpeak which in future it will promote (and no doubt soon police and enforce) on its platform.  Presumably our days of using “Whitehall” as convenient code and shorthand for all the Government ministries and departments in central London are numbered. 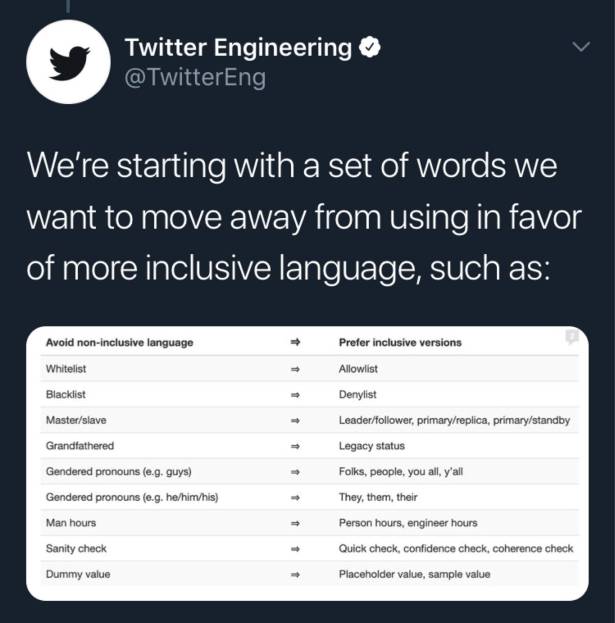 Sometimes if feels as though Trump’s Executive Order modifying Section 230 of the US Communications Decency Act 1996 so as to designate the social media giants as publishers rather than the mere ‘platforms’ they claim to be – the effect of which would be to bring them under the scope the First Amendment’s prohibitions on the restriction of free speech – can’t come into full legal effect fast enough.

Anyway, sharing the increasing frustration at all this, just under two weeks ago, and like many others then and since, I joined the alternative platform Parler, with its absolute commitment to non-censorship and free speech.  Reportedly, it had 300,000 new sign-ups from UK Twitter users alone over the weekend of 21st-22nd June, growing from 1 million to 1.5 million users in only a week.

Although the Parler user interface is still somewhat clunky, and the platform could benefit from a few improvements, it’s nevertheless perfectly functional. A big plus the 1,000-character limit, which is much better than Twitter’s 280.  That often means only one post rather than what, on Twitter, would require a two or three tweet thread. Although I know of one or two users who have junked Twitter accounts with over 25,000 followers to move across completely, most still have both running in parallel for the moment.

In contrast to Twitter’s shadowbanning and sometimes outright censoring of conservative views, not to mention steady erosion of followers, the early Parler impression is so far living up to its free speech reputation.  Although an initial surge obviously isn’t representative, acquiring 1,000 followers in only 10 days is nevertheless a satisfying contrast to the last 18 months on Twitter.  Many familiar, reciprocal-follow faces from Twitter are there; one of the pleasures of the last two weeks’ experience has been finding a new raft of them every day, including some of social media’s best ‘climate-change’-sceptics.

Dear bloggers/influencers. When posting at Twitter, also please post at Parler so we can cite you at Parler instead of Twitter whenever we write posts. Better to send traffic there until Twitter quits suppressing us. THANKS pic.twitter.com/ouV3LydZ37

To all my followers, I am now Active on ‘Parler’ too https://t.co/tsSgCJ7JPl Sick of Twitter deleting my followers. #twittercontrol

The more supercilious elements of the left-‘liberal’ elite Establishment’s mainstream media, conveniently ignoring the number of centre-right and even centrist MPs and journalists using the platform, are already trying falsely to portray Parler as merely a safe-space echo-chamber for ‘far-right’ ‘hate speech’, though evidently based on a highly selective and partisan representation relying on only one or two examples.  It suggests that Parler might have them worried.

You will find there, not only me, but some of my fellow-writers at The Conservative Woman:

Come and join us there on Parler.