Now that our once-impartial unelected monarchy has become eco-politicised, we need to consider whether it’s time for an elective presidency to replace it

In the political context, ultimate power is a double-edged sword.

When vested in dictatorships, even in the supposedly enlightened 20th century it has produced brutal oppression and death on an almost unimaginable scale; an estimated 100-plus million under Communism worldwide, and 10 million under Nazism, including the Holocaust, in Central and Eastern Europe’s Bloodlands alone. When vested in autocratic monarchies, it has had terrible outcomes too; Kaiser Wilhelm II bears a huge responsibility for launching Germany and the rest of Europe into the First World War, which left some  20 million dead and 21 million wounded.

However, when vested in a constitutional monarchy within a democracy, it is a relatively moderating, even benign, influence. Nominally vesting ultimate power in an institution like the UK’s hitherto apolitical constitutional monarchy has the advantage that such a power is specifically intended not to be actively exercised, but merely held passively as part of a system of checks and balances (in our case, the traditional conventions of our unwritten constitution and parliamentary sovereignty), so as to deny it to anyone else.

However, for that advantage to endure and to stay acceptable to the population, both the institution itself and its unelected incumbents must remain not only scrupulously impartial and politically neutral, but visibly so. Once either starts to express or even appear to endorse a partisan position on a contentious, divisive political issue, the institution’s constitutional legitimacy declines, making the continued justification for its very existence disputable.

The UK is now fast approaching this point; the unelected monarchy’s increasing tendency to involve itself in divisive political issues raises the question of whether we might not, after all, be better off with an elected presidency whose incumbent at least has democratic consent and more importantly, can be thrown out.

For 69 years on the throne, the Queen has wisely remained so inscrutable on matters political that, despite the occasional speculative but unconfirmed journalist’s claim, few if any have had much idea of her genuine views beyond her reportedly generally low opinion of politicians – which can hardly be controversial, given the extent to which so many people happily admit to sharing it.

But regrettably, she has recently been persuaded to venture into the political arena for the second time in only months – the first having been to tell the population that not to get Covid-vaccinated was selfish – and on arguably the most contentious and divisive political issue of our time, by calling climate-change the ‘biggest challenge facing the world‘, whose leaders should act urgently ‘to save the planet‘, and by also reportedly expressing irritation at their inaction.

Considering the enormous cost to the vast majority of her subjects of the ‘solutions’ proposed by her intended audience, she would have been better advised to avoid it. However, it’s hard to heap much blame on a 95-year-old woman, alone for the first time in 73 odd years, coming to terms with the death of her beloved husband, maybe lacking his guiding hand, and still on the receiving end of continuing attacks on her family from her self-exiled and self-indulgent wayward grandson and his narcissistic, resentful current wife.

What we can guess is that her dependence on her eco-obsessed eldest son and her need for him must be higher than it ever was, and possibly higher than we previously thought. Whether it’s by him that she’s being urged to intervene, we don’t know: but what we do know is that he will not shut up on the subject, whatever the opprobrium he rightly attracts, and whatever the constitutional damage he thereby risks doing to the very institution that he aspires to head. In the run-up to COP26, he has surpassed himself in excessive Green loquaciousness, and, judging by the reaction, not in a good way.

Prince Charles will never learn, will he?
He is NOT an elected politician.
This is NOT his role.
And his hypocrisy is off the scale, given he’s emitted more carbon than you or me could imagine.
I thought he’d learn his lesson as his mother entered her twilight years.
Seems not. https://t.co/m43sVf9IeX

In under two weeks Prince Charles @ClarenceHouse has managed on private jets & helicopters to clock up:

Don’t worried mate I’ve put on my coat & turned down the heating. pic.twitter.com/mXdHRngCz2

I’ve written previously on the manifest unfitness of Prince Charles to succeed to the throne, not only because of his persistent advocacy of divisive Green-extremism but also his inveterate political meddling and attempts to influence government policy on many other issues as well, and I need not repeat those criticisms here.

But there are others. Nigel Farage has recently reminded us of the time, about ten years ago, when Prince Charles came to Brussels to deliver an address to the EU’s Potemkin Parliament, and actually demanded the arrogation by the anti-democratic EU of more power from nation-states to itself, so it could ‘deal with climate change because the North Pole will melt within seven years‘; (spoiler – it hasn’t).

This surely must be the first time a future British monarch has begged a foreign legislature to remove the power of democratic self-government from the nation of which he stood to become sovereign. One can’t help wondering if this is even borderline treasonous – intriguingly, ‘attempting to put any force or constraint upon…..both Houses or either House of Parliament‘ still constitutes the crime of felony treason under the Treason Felony Act 1848.

He now also appears to be backing, not merely the avowedly anti-capitalist and freedom-averse Green-Left Extinction Rebellion, but also Insulate Britain in their campaign of motorway disruption.

Presumably, he has so far been spared the experience of either missing a job interview, or not being able to take a child to school, or being prevented from following an ambulance taking a sick relative to hospital. How lucky for him; but surely now we have had a surfeit of royal catastrophist eco-lectures from him.

Possibly worst of all, Prince William, once regarded as the potential saviour of the monarchy – assuming it even survives his father – now appears to be going down the same road. From calls to the young to ‘fight climate change‘ to exhorting the world’s best brains and billionaires to ‘repair the planet‘, and even praising his father’s eco-obsessiveness, he appears to have swallowed the Green pill wholesale.

Though amazingly, he seemed less keen on swallowing a jar of dead bugs offered to him by his wife at a COP26 presentation of the kind of ‘food’ which would allegedly help to save the planet.

It’s apparently not yet dawned on him that under the radical Green policies he’s now openly espousing in the wake of his eco-zealot father, it’s we the masses who would be expected to subsist on a ‘sustainable’ meagre diet including the bugs he recoils from, while the gilded elite continue to enjoy jetting to magnificent banquets. 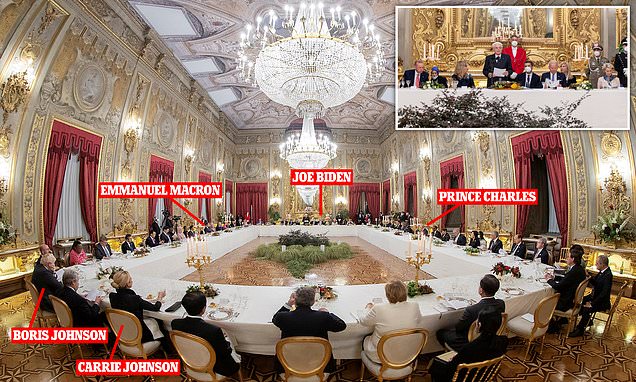 And if that’s not enough, also jumping on to COP26’s Royal bandwagon comes his cousin Princess Eugenie, – accompanied, naturally, by the obligatory celebrity friend – to ‘speak to experts, examine, and do more to help save the planet’. She seems to have been particularly impressed by Professor Gail Whiteman, founder of the Arctic Base Camp project, whose main contribution to the Glasgow eco-boondoggle was to transport an iceberg from an Arctic glacier to Glasgow to ‘prove’ that ice melts when exposed to mild November temperatures in temperate northern Britain. Who knew?

Prof Gail Whiteman @GenerationCO2 @ArcticBasecamp @UofEBusiness talks to @SkyNews about rising sea levels and the iceberg delivered to #COP26 as visible reminder of what #Arctic warming means for the planet. https://t.co/rBiLVoIrVj

Did  it occur to our Eugenie to quiz Prof Whiteman on how much ‘carbon’ was emitted in bringing the block of ice from Greenland to melt in Glasgow? Or to ask what, in any event, this proved, given that glaciers in Arctic Iceland and Norway retreated rapidly during the 1920s and 1930s? Apparently not.

The glaciers of Iceland and Norway started retreating during the 1770s and retreated rapidly during the 1920s and 1930shttps://t.co/dvEbYxeo04 pic.twitter.com/3E9oAenbtK

It seems to have escaped the now openly and enthusiastically eco-Royals’ notice that it’s mainly among the normally anti-monarchy and anti-Royalist Green-Left that their interventions are most welcomed. Are they so naïve as to think they will gain friends and allies on that side of the political aisle by wholeheartedly embracing the Green shibboleths of climate change, Earth-destroying overpopulation and Gaia –worship? If they do, I suspect they’re making a grave mistake.

Curiously, the thought that the approval their eco advocacy attracts from the overwhelmingly republican Woke-Green-Left may be self-defeating, in that by furthering its ostensible environmental aims, they weaken their own constitutional legitimacy, appears not to have occurred to them.  But it has, rightly, occurred to others:

Does Prince Charles realise that the majority of the eco -warrior hippies would disband the monarchy in a bloody heartbeat. Whilst the rest of us support it. Question is with this non neutrality he’s going full steam ahead on, that support won’t be for much longer. I despair 😩

Three generations of the British Royal Family all intervening on the same side, in possibly the most contentious and divisive political issue of the day, erodes their very legitimacy. It’s not a question of denying their right personally to hold those views, but one of questioning their wisdom constitutionally in expressing them.

Elected presidencies in a republic are tricky things to get right. If largely ceremonial and non-political, the incumbents can be relatively insignificant, like Ireland’s O’Higgins or Germany’s Steinmeier. But if politicised and part of the executive, they can be incredibly divisive, like France’s Macron or Trump and Biden in the USA.

But the crucial point is that they are all subject to democratic consent and can be ejected from office by the electorate. Here in the UK, we appear to be progressing rapidly towards the worst of both systems – an increasingly politicised and thus divisive monarchy, but where the incumbents, being unelected, need no democratic consent and cannot be removed from office.

To find myself – formerly a staunch supporter of apolitical constitutional monarchy as the not-perfect-but-arguably-least-bad option for Head of State in a Western liberal democracy –  becoming a potential convert to an elective presidency within a constitutional republic suggests to me there’s something rotten in the state of Denmark (or more accurately, the House of Windsor), and that a national debate on the issue is overdue.