Via the ineptitude of its candidate, and hostility from its residual Farageistes, UKIP has managed to convert the Stoke Central by-election from a virtual one-way shoe-in into an uncertain three-way toss-up.

On the face of it, UKIP’s choice of candidate to contest the Stoke-on-Trent Central by-election caused by the resignation of Labour’s Tristram Hunt should have been obvious, and uncomplicated.

Here was a constituency where, on the best available estimate, the Leave vote in the EU Referendum was a massive 69.4%: where the voters hadn’t returned a Conservative MP in decades: where there was widespread disaffection with a Labour Party dominated by London-centric Metropolitan New-Leftism rather than traditional working-class empathy: and where UKIP put up a very creditable showing at the 2015 General Election.

It’s worth examining that latter result in more detail. UKIP came from 5th in 2010 on a measly 1.1%, to 2nd in 2015 on 22.7% with an 18.3 swing to it. In a General Election where the Conservatives achieved among their highest-ever number of seat gains, they didn’t even manage to come 2nd in Stoke Central, being pipped by UKIP into 3rd place.

This surely should have suggested UKIP re-selecting its 2015 candidate, Mick Harold, to contest the seat. As a Stoke Councillor, Chairman of UKIP’s Stoke branch, and Deputy Chairman of its Staffordshire County Committee, he appeared to have experience plus an established public profile, in both local government and local party, strong enough to stand a real chance of taking the seat from Labour.

And a real chance, moreover, not only on his own merits. Because Labour had selected, to try and retain its Stoke Central seat, the execrably foul-mouthed, mendacious, misogynistic Gareth Snell, most notable, among a string of other gaffes, for describing Brexit as “a pile of shit” to his own Brexit-voting constituency, and arguably the most repellent Labour candidate that even seasoned commentators can remember.

Enter, however, UKIP’s recently-elected new Leader, Paul Nuttall. Already an elected UKIP MEP in the European Parliament, it’s an intriguing, albeit ultimately futile, exercise to speculate on what Nuttall’s real motives were.

Perhaps he genuinely felt the party leader belonged in Westminster, not in Brussels/Strasbourg. Perhaps he wanted to show that, within only months of being elected, he could do what Nigel Farage never managed to do in all his years as Leader, namely, win a House of Commons seat. Perhaps he saw a Westminster seat as a convenient replacement for his Brussels/Strasbourg one when the UK exits the EU before the next European Parliament elections in 2019. Who knows?

Whatever the reason, though, Nuttall decided to seek UKIP’s candidature, and was duly selected. Whether Harold was “persuaded” to stand aside, or did so entirely voluntarily, as his statement on it insists, is perhaps another intriguing subject for speculation.

Nuttall, though, is a clown. It didn’t take long for the first evidence to surface, in the shape of the now-infamous Hillsborough imbroglio, when Nuttall claimed to have lost “close personal friends” in the disaster.

Had the final paragraph merely read “…when 96 Liverpool fans lost their lives.”, his statement would still have been – and rightly so – a searing condemnation of the Government’s obfuscation of key facts relevant to determining blame. It did not lack power. It did not need the addition of the “including close personal friends of mine” to give it extra force. So whatever persuaded him to add such an unnecessary, self-serving, and easily-verifiable-as-untruthful embellishment? As so often, over-egging the pudding merely leaves the chef with egg on his face.

Following that, we had the “new address” fiasco. Even if, as claimed, Nuttall’s original move to Stoke was delayed because of a vacancy / chain issue, why was the necessity for a Stoke address not resolved the minute Nuttall indicated an interest in the constituency? Is it such a rental hotspot? And how inept is it to allow one’s self to be photographed quite clearly camping out in a hastily newly-acquired “home”? No journalist worth their salt, however un-biased, could fail to run with a “carpetbagging” narrative in those circumstances. 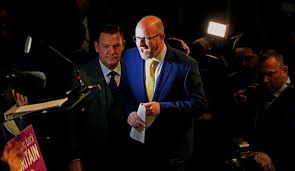 Then there’s the missing weekend. Despite it being the last weekend of campaigning before the Thursday 23rd February polling day, Nuttall was apparently AWOL from Stoke for most of it, attending the UKIP Spring Conference in Bolton, where he made a somewhat bizarre “They will not break me”-themed speech.

Was his attendance in person really necessary, Party Leader or not, on the last weekend before a crucial by-election? Could a speech to Spring Conference via video-link not have been arranged? Or was it vital, despite the risk to the by-election campaign, to prevent Farage in effect taking over the Conference?

To be fair, it hasn’t all been of Nuttall’s own making. Most of the so-called “independent” Press has been its usual homogeneously ‘liberal’-left biased, pro-EU self, determined to report in a bad light any policies, or parties, outside what’s deemed to be the acceptable Overton Window of British politics. But it’s also inescapable that the inept, bumbling Nuttall has given it a cornucopia of material to work with.

There is, however an additional factor. The friendly-fire, the blue-on-blue incoming from the Farageiste Falange.

The “Hillsborough” furore had largely died down by last week, the narrative having run its course and the last drop of press mileage having been squeezed out of it: until, that is, Arron Banks, major UKIP funder but also, I’d suggest, eminence grise of the Farageistes, tweeted a reference to Hillsborough having been an “accident”.

Whatever Hillsborough was or wasn’t, it certainly wasn’t an accident: and though subsequent Banks tweets have correctly referred to it as a disaster, that has been enough to revive the entire controversy to Nuttall’s detriment: as have the allusions to Banks being “sick of hearing about it”. Given Nuttall’s Merseyside origins, it’s difficult to believe the choice of the word “accident” was itself accidental.

Hard on the heels of that, at UKIP’s Bolton Spring Conference, came Farage’s “helpful” intervention that “Nuttall must win Stoke”, and that a win in the by-election there is “fundamental to the party’s future”. You might think this is a bit rich coming from an ex-Leader who serially failed to get elected as an MP, but we’ll let that pass.

What it does, of course, is to make Nuttall’s position as Leader hostage to electoral fortune, and imply that, should he fail, his leadership is inimical to UKIP’s future electoral prospects. Or, put another way: all other candidates having now been eliminated, Farage fancies yet another crack?

So what has been the cumulative effect of all this? As of early evening Wednesday 22 February, and per Ladbrokes, Labour are back as 4/7 favourites, despite having been seemingly been behind for much of the campaign: UKIP have drifted out to 2/1, having previously been favourites: and the Conservatives have come from nowhere to be at 7/1 and talking up their own chances of pulling off a surprise . Yes, in Stoke.

Quite how UKIP has managed to achieve this, after starting out from a position of apparently unassailable advantage, almost beggars belief. In the space of a few short weeks, and having been initially blessed with what were, for it, virtually the most favourable circumstances imaginable, it’s converted what should have been a foregone conclusion into a very close-run thing.

That Labour could pull it off, with a victory for by far the foulest candidate, standing for by far the least-deserving party, is an appalling prospect. But if so, UKIP will have no-one to blame but itself.