“Oh, what a tangled web we weave, exploiting our maternity leave” –           (with apologies to Sir Walter Scott)

Note: this is the longer (and updated) version of the article originally published at The Conservative Woman on Wednesday 25th July 2018

Pairing’ is one of those arcane Parliamentary practices covering voting – or rather, not voting – that somehow survives where modern electronic, internet-enabled technology ought to obviate the need for MPs to vote in person by physically trooping through Aye or No lobbies to be physically counted by tellers, but doesn’t.

It’s a strictly informal arrangement, not recognised by official House of Commons procedures, between two MPs of opposing parties not to vote in a division, thereby cancelling each other’s votes out.  Though clearly equitable in the case of, say, a Minister or MP temporarily overseas on official businesses, in other circumstances it can be open to abuse.

The Commons votes of Monday/Tuesday 16th/17th July respectively, on the Cross-Border Trade Bill, saturated with Brexit significance by a 12-strong bloc of unreconciled ‘Conservative’-Remainer MPs trying to defeat their own government, were extremely close. In the end, the Government prevailed by 6 votes, mainly thanks to the votes of 5  Labour-Brexiteer MPs.

At least three Liberal-Democrat MPs, however, were absent, and so did not vote: it was over one of them, Jo Swinson, that a row subsequently erupted. The allegation was made that, despite being officially ‘paired’ with ‘Conservative’ Party Chairman Brandon Lewis MP, because of her absence on maternity leave, the Government Whips instructed all its available MPs to vote anyway, effectively breaking the Lewis-Swinson ‘pair’.

Accusation, denial, condemnation and counter-accusation duly followed, culminating in the Government first claiming that the ‘pair’-breaking had been an ‘honest’ mistake’, but then apologising profusely for it and vowing not to repeat it.

So far, so predictable. And there the matter might have subsided, but for an apparent attempt – whether instigated by Swinson herself, or by LibDem Chief Whip Alastair Carmichael, or by identity-politics SJWs from one of the other Leftist parties is unclear – to capitalise on it by playing the feminist victim-card, stressing Swinson’s inability to attend the key vote(s) specifically because of her being on maternity leave.

Perhaps, though, someone should have checked the LibDems’ Twitter feed first.

Because it didn’t take long to emerge that, despite Swinson’s maternity leave having allegedly prevented her attendance at those key Commons votes, it fortuitously hadn’t prevented her virtue-signalling attendance at an anti-Trump demonstration 3 or 4 days earlier, on Friday 13th July. Along, evidently, with said offspring. 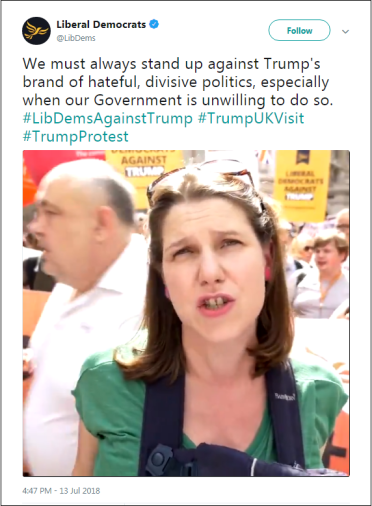 In a truly shocking, but no doubt inadvertent, aberration from feminist solidarity, this was inconveniently pointed out, by, among others, one of those 5 Labour-Brexiteers MPs whose vote enabled a Government victory, Vauxhall’s Kate Hoey. And was it right, asked commentators, to whinge about exclusion from a key vote because of being on maternity leave, but to take an infant along to what was potentially a violent demonstration?

Then it all got worse.

It transpired that, apart from Swinson, neither the immediate past, nor present, leader of the LibDems managed to attend those key votes either – the three of them accounting for no fewer than a quarter of their entire complement of 12 MPs.

Even more deliciously, in Leader Vince Cable’s case, this was because he had been busy attending a ‘confidential dinner’ about the setting up of a new ‘anti-Brexit movement’.

A party leader, exposed as conspiring with others to form a new party to compete with his own party. You’d need a heart of stone not to laugh.

And not only that. A new, centrist, pro-Remain party? But isn’t this supposed to be the defining USP and key electoral proposition of the party that he now leads? The one which secured a massive, erm,  7 per cent of the vote at the 2017 General Election?

In addition, the LibDems refused to say which Labour figures, if any, had attended Cable’s ‘confidential dinner’. Was that perhaps because there was little interest from anti-Corbyn Labour ‘moderates’, contemplating a splitting-off, at the prospect of Cable as leader? And whoever might be providing the funding remains a matter for speculation.

Probably inevitably, the spat has prompted the operation of ‘pairing’ arrangements to be examined rather more closely than might otherwise have occurred. Of 2,000 ‘pairs’ arranged since the Election, reported Politics Sense, 66 have been broken: 14 by the Government and 52 by Opposition parties, of which 7 were by the Lib Dems.

Which, assuming those figures are correct, prompted the question: are the LibDems themselves the biggest breakers of ‘pairing’ arrangements?

Then, on the morning of Monday 23rd July, The Times reported the rumoured existence of a LibDem plot to oust and replace Cable as party leader. Given the multiplicity of problems, muddle and even failures currently besetting the party – not least the semi-existential question of why on earth anyone should believe in them as a political force when they clearly don’t believe in themselves as one – this was hardly a surprising culmination to what started out in all probability as a mere opportunistic anti-Tory, anti-Brexit gripe. 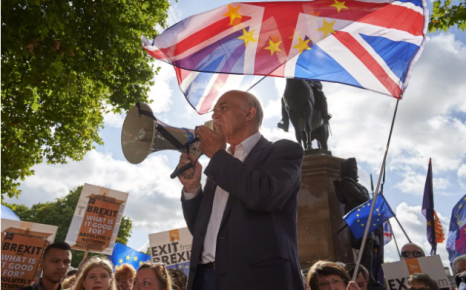 Going, and in just 5 days, from carping about alleged breaches of anachronistic Parliamentary procedure to a plot to defenestrate and replace your Party Leader is pretty impressive, even for the LibDems. Remind me again of that old proverb about people in glass houses?

The final irony of this whole imbroglio is that it still leaves unresolved the thorny issue of ‘pairing’. Moving in one fell swoop to a facility for real-time electronic voting, even from non-Parliament locations, sounds tempting, but e-security would be a constant concern, and the system would be wide open to voting-fraud.

On the other hand, many struggle to understand why, when MPs are provided by the taxpayer with handsome salaries, along with generous allowances for in-London housing and staff, they should in effect be excused, on sometimes purely domestic grounds, from attending and voting in debates?

As so often, the incremental approach seems to have an advantage. Tighten up the conventions on what constitutes a valid reason, justifying a pairing, for the non-attending and non-voting. And don’t enthusiastically tweet pictures of your female MP attending raucous lefty demos with a baby if you’re going to play the maternity-leave victim-card on her behalf less than a week later.

Whether, of course, this would be enough to save both Cable’s leadership and Swinson’s credibility is a moot point. One would be unwise to bet on it.