I must admit to having a bit of a sneaking regard for Michael Fabricant, the Tory MP for Lichfield.

He has the refreshing qualities, all too rare in an MP, firstly of not taking himself too seriously, and secondly of not being afraid to ruffle the right-on feathers of the serially-offended with a deliciously off-message, politically-incorrect put-down.

Like his tweeting a sardonic “Well, about time”, when the sphincter-clenchingly P-C, Cameroon-‘liberal’, SJW-‘feminist’, and unrepentant expenses-fiddler Maria Miller, Tory MP for Basingstoke – she of the smirking, 32-seconds, insouciant, non-apologetic ‘apology’ to the House of Commons – finally deigned to accept the inevitable and reluctantly relinquished her Ministerial chair.

Or his observation (possibly sympathised with, if not exactly shared, by much of country, in truth) that he’d find it difficult to share a discussion panel with the illiberal, irascibly-leftist Yasmin Alibhai-Brown without resorting to violence.

So it’s quite instructive to examine in detail his latest piece a couple of days ago for The Daily Telegraph on how and why he plans to vote on Theresa May’s EU Withdrawal Agreement, aka BRINO-Deal, aka Instrument of Capitulation, when it comes before Parliament on Tuesday 11th December. Perhaps a little fisking – not much seen these days – might be in order. 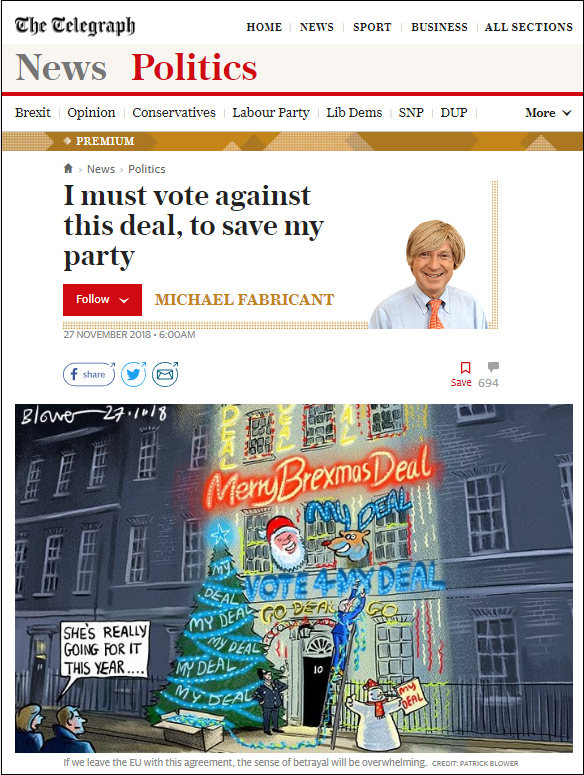 Keep that headline in  mind. It’s highly relevant to what’s to come.

Fabricant starts well. He summarises the thrust of Theresa May’s Lancaster House speech of January 2017, especially her declaration of intent to leave the Customs Union, Single Market, and jurisdiction of the European Court of Justice, and her warning that remaining in the first two would in effect be not leaving the EU at all. Then he goes on to criticise how this has been diluted:

“Historians will come to write the story of how Lancaster House morphed into present Government policy. It will be a story of the inflexibility of EU leaders, the botched 2017 general election, and the tin ear of British political leadership. By leaving most of the negotiations to civil servants, any semblance of political sensitivity was lost.”

Isn’t he missing something? The deliberate deception by no less than the Prime Minister herself of her Cabinet, her MPs, her party, her voters, and the country, side-lining and ignoring the preparatory work being done by the Department for Exiting the EU while cynically using it as camouflage, in a No. 10 backstairs operation to devise her Chequers Plan in secret and pre-clear it with German Chancellor Angela Merkel, before imposing it on Cabinet at ultra-short notice and declaring it to be un-amendable, threatening to sack any Cabinet Minister who objected to either its process or its content?

“After the Eastleigh by-election when Ukip won 28 per cent of the vote and came a close second to the Liberal Democrats, I told David Cameron that unless the European question was neutralised, we would never be able to form a government. Ukip, or a similar party, would always shave 6-10 per cent off Conservative votes in our marginal seats.”

Fabricant here in effect admits that his prime reason for recommending Cameron in 2013 to concede an In/Out EU Referendum was not the principled democratic one of giving the electorate the chance to have its first vote in 38 years on Britain’s continuing membership of the EU: but the narrow, partisan, party-management one of ensuring “the European question was neutralised” so as to secure Tory Party electoral advantage. Party before country, in other words.

“I realise the huge risks in voting against the Government on this issue. The Government might collapse, we might crash out of Europe in March over a precipice, or it might even jeopardise Brexit itself.”

It’s a shame to see Fabricant, apparently a committed Brexiteer, channelling the standard Continuity-Remainer / BBC description of a reversion, if there is no deal, to trading with the EU bloc on the same WTO terms as do over 100 other non-EU countries as a “crash out of Europe over a precipice”.

But his first worry seems to be that the Government might collapse. Well, I suspect that the nation could possibly suffer much worse imminently than the collapse of a justifiably unpopular Government, which even Fabricant himself rightly criticises. In comparison , the risk of Brexit not happening at all, with its enormous adverse implications for public trust in democracy itself, seems to rank only third.

“But the risks of accepting this deal are even greater. If we leave the EU with this agreement, the sense of betrayal will be overwhelming and the Conservative Party will be out of office for a decade or more. Arlene Foster has already said the DUP will revisit the confidence and supply arrangement if the Withdrawal Agreement passes.”

Fabricant is undoubtedly right that the sense of betrayal will be overwhelming: but once again, it’s the implications of that sense of betrayal on the future electoral prospects of, and the future likelihood of occupying office for, the ‘Conservative’ Party which seem to be paramount here, not on a disastrous collapse in public trust in the entire democratic process.

“However, there is an alternative. After a Commons defeat, No 10 could regain the initiative. We could still enter into a free trade agreement with the EU – an agreement encouraged by Merkel and Macron. And contingency no-deal planning could still mean an orderly, and more complete, Brexit.”

Given May’s intransigence and stubbornness, and her subservience to her coterie of anti-Brexit advisers and officials, the idea that she could somehow pivot, from a Commons defeat of the deal into which she has invested so much personal and political capital to seeking a Free Trade Agreement alternative, seems to be in the realms of fantasy – even if it had not already been dashed, as Fabricant himself acknowledges a few paragraphs earlier, by Macron’s avowed determination. . .

“to keep us in the backstop as blackmail until the UK agrees to France’s demands on fishing rights in British waters”.

The crucial message comes in the way the concluding paragraph links back to the headline:

“I rarely vote against my Government, but conscience and the long-term future of my nation, and yes, my party too, take precedence”

It’s hard not to wonder whether Fabricant’s perception of the national interest being fortuitously in alignment with Party interest isn’t once again the major reason for his decision. After all, the ‘Conservative’ Party is saddled, by no means unfairly, with the “party before country” label: with the assumption, not just among the Left, that when it comes to the crunch, it will always prioritise its own survival above the interests of the country: that it’s what Tories always, with very few exceptions, do.

Fabricant’s citing that reason so explicitly will do little to dispel the Tories’ “party before country” reputation. He should be voting against Theresa May’s execrable BRINO-Deal to save his country, and for no other reason. In comparison, the fate of his party, and even less, its current leader, is immaterial.