Last week’s three days of (anti)-Brexit votes showed how the House of Commons has finally reversed its mythical status, to become instead the Cradle of Anti-Democracy.

Note: Longer and updated version of the article originally published at The Conservative Woman on Tuesday 19th March 2019

Almost exactly a year after self-congratulatingly celebrating the centenary of women winning the right to vote, Parliament last week in effect told the 49 per cent of female participants in the 2016 EU Referendum who voted to Leave that their votes didn’t count.

However, mindful as always of the vital importance of gender-equality, it simultaneously did the same to Leave-voting men. Britain’s fabled “Cradle of Democracy” effectively withdrew the franchise from 17.4 million people, for having had the temerity to vote in a way not to its liking.

For an institution whose lineage can be traced back 804 years to Magna Carta, Parliament’s descent from consulting the people to dismissing their response has merely taken less than four years. It’s worth recalling some of the major stages in that decline. 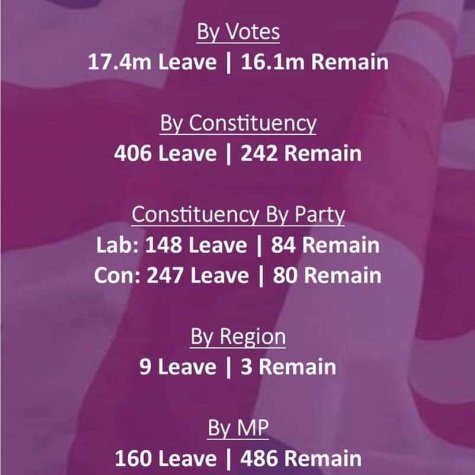 In February 2017, MPs voted by 498 votes to 114 to trigger Article 50. At the 2017 General Election, approximately 85 per cent of votes were cast for parties pledging in their manifestos to implement the Referendum result.

Yet Parliament also moved quickly to signal its intent to dilute, frustrate or preferably overturn the Referendum result. Just take the example of Select Committee Chairs. In October 2016, it elected the fiercely pro-Remain Hilary Benn as Chair of the Brexit Department Select Committee in preference to Leave-er Kate Hoey. At the same time, it elected the pro-Remain and open-borders/free-movement enthusiast Yvette Cooper as head of the Home Affairs Select Committee. After the 2017 General Election, it appointed arch-Remainer and Osborne coat-tailer Nicky Morgan to the chairmanship of the Treasury Select Committee.

Those three appointments in particular could almost have been designed to ensure that the sidelining and use as camouflage by Number Ten for May’s secret Chequers Deal from Day One did not emerge until early July 2018: that Home Office preparations under arch-Remainer Amber Rudd to devise and prepare more robust immigration controls post-Brexit perhaps received either more opposition, or less rigorous scrutiny, than might have been appropriate: and that the arch-Remainer Chancellor Philip Hammond would not be too closely challenged, either on any refusal to allocate funds and resources to contingency preparations for No-Deal, or on excessively gloomy economic forecasts for almost any Brexit other than May’s Remain-by-Stealth, Brexit-in-Name-Only “Withdrawal” Agreement.

That was just the start. Week by week, month by month, over the past two-and-three-quarters years, both Houses of Parliament have come to insert themselves more and more into diluting or frustrating the Brexit process, and wresting not only the means, but the Brexit decision itself, back from the electorate whose decision it sought, but did not approve of.

Coming to a head last week, on Tuesday 12 March MPs voted by 391 votes to 242 to reject May’s (non)-“revised” “Withdrawal” Agreement & minimally-“clarified” Political Declaration. From many of the speeches made during the debate, especially from the Labour benches and the recently-defected ex-‘Conservative’ TIG-gers, it was hard to avoid the conclusion that even this softest-of-soft-Brexits was too much for some.

On Wednesday 13th March. following that defeat, May led for the Government on a Commons motion to rule out No-Deal, thus not only directly contradicting everything she has consistently asserted for the last two-and-a-half years, but effectively pulling the rug from under her own feet in any remaining negotiations. She initially granted her MPs a free vote on that No-Deal motion, not out of any respect for individual conscience or democracy, but solely to allow herself to get away with voting against her own Government’s policy – but then subsequently three-line-whipped it.

In the run-up to the main vote, the amendment for the Malthouse Compromise Plan B, requiring the Government to seek an extension of Article 50 to no later than 22nd May 2019, and a transition period not extending beyond December 2021, was defeated by 374 votes to 164. With the anti-delay ERG complement probably amounting to 90-100 at most, it was clear that the 210 majority against the amendment indicated a considerable number of ‘Conservative’ unreconstructed Remainers hoping for a long, Brexit-destroying deferment.

The substantive motion, to prevent the UK ever leaving the EU without a Withdrawal Agreement in any circumstances, was approved by 321 votes to 278.

It’s an accepted part of our unwritten Constitution that, irrespective of three-line-whip or free vote, the principle of Cabinet collective responsibility still applies. Yet arch-Remainer Cabinet members and Ministers Amber Rudd, David Gauke, Greg Clark and David Mundell abstained with no consequences.

On Thursday 14th March, although there were defeats for two Labour amendments, the main motion for a delay to Brexit, for a short period via finally approving May’s exit deal on the third attempt by Wednesday 20th March, or for a longer period should that not be possible, was approved by 412 votes to 202.

In the space of three days, therefore, the Remainer-dominated House of Commons has voted against leaving the EU even on May’s ultra-soft Brexit deal: against leaving the EU on No-Deal: and in favour of extending – or in many individual cases, preferably revoking – Article 50, to place the entire Brexit process in uncertain suspended animation. It has been made quite clear that there is in reality no Leave option which can command a majority in a Remainer-dominated House of Commons which is determined not to allow one.

Contrast that with recent opinion polls which indicate that a majority of the public expressing a preference do not support May or her deal, would prefer to leave with No-Deal, and are opposed to an Article 50 extension. Only 12 per cent said they believed that May’s Deal delivered the Brexit that the British public voted for. 58 per cent said that it does not. Once again, the yawning chasm that now exists between the voting public in the country and its MPs ensconced in their self-referential Westminster Bubble is exposed in unrelieved starkness.

Now, there is a persuasive argument that Parliament can posture all it wants, and vote in favour of anything it likes, but it cannot force its will on a Prime Minister unless the PM agrees with it. Unfortunately, though, the current Prime Minister is Theresa May, who contrived to lose her majority in Parliament, and whose private views on Brexit undoubtedly chime more with the Remainer majority in Parliament than they do with either the electorate whose verdict she purports to respect or the membership of the party she purports unconvincingly to lead.

Commentators have rightly neither hesitated, nor pulled any punches, in excoriating the antics of MPs in a Parliament increasingly antagonistic to the democracy which puts them there.

Its smug, self-satisfied, self-entitled politicians have launched a coup against Brexit, with 800 years of democracy unravelling before our very eyes, thundered David Starkey in The Daily Mail.

This disgraceful Parliament has lost all legitimacy, rebuked Gerald Warner at Reaction. Yes, our Prime Minister is dire, but this shameless Remainer Parliament will go down to an ignominious place in history too, predicted The Daily Telegraph’s Dia Chakravarty. Britain’s Remainer elites have declared war on democracy, accused her colleague Allister Heath.

Parliament’s plot to thwart Brexit is as good as complete, observed Brendan O’Neill in The Spectator. The future of democracy itself is on the line, warned Tom Slater at Spiked.

They are all correct. Last week will go down in history as the week our democracy was in effect terminated with extreme prejudice, by anti-democratic Remainer MPs who think we are unfit to decide our own political future, despite having asked us to be precisely that.

The House of Commons, just like its Lords counterpart, has now become the Cradle of Anti-Democracy.