Note: Longer and updated version of the article originally published at The Conservative Woman on Monday 6th May 2019

To determine the real culprit behind the Huawei security leak, consider who might actually have had most to gain from it

On the face of it, “Conservative” MP Gavin Williamson, peremptorily sacked as Defence Secretary by Treacherous, Toxic Theresa over the Huawei scandal, seemed such an unlikely candidate for the role of Martyred- By-May.

Williamson was May’s parliamentary campaign manager during her July 2016 leadership election-turned-coronation, and was appointed as Chief Whip by her in reward. Subsequently, he was the first person she consulted in November 2017 about a replacement for Michael Fallon at Defence, acquiescing immediately when he allegedly responded by suggesting himself.

He’s long been accused, not without justification, of being hubristic, of estimating his popularity, performance and political potential much higher than both colleagues’ and commentators’ estimation of all three, and of being unfortunately, almost childishly, gaffe-prone.

Yet on this occasion, he might just be like the stopped clock that’s right twice a day.

In two articles for The Conservative Woman, here and here, Bruce Newsome, an expert on global security risks, international conflict and counter-terrorism, and lecturer in international relations at the University of California at Berkeley, set out the geo-strategic and security implications of what, to many, is the unfathomable decision to allow what is in effect a corporate arm of the Chinese Communist State to infiltrate our national communications system and have potential access to some of our most sensitive security infrastructure.

Quite rightly, much of his two articles, along with that of Tim Bradshaw, also at The Conservative Woman, focus on Williamson, May and her eminence grise, Cabinet Secretary Sir Mark Sedwill. Correct though this is, the position, and possibly even role, of some of the other players in the drama may be going by default.

On first reading Tim Shipman’s account of the leak inquiry in The Times of 28th April, two days before before Williamson’s theatrical sacking, I was initially surprised to find the comparatively-lowly International Development Secretary, then Penny Mordaunt, listed as a member of the National Security Council. Yes, the Home, Defence, and Foreign Secretaries you would anticipate, I thought, possibly even Health too, but International Development? Overseas Aid?

A few minutes’ cursory research, however, revealed the membership to be somewhat wider than you might expect for such a high-falutin’ and sensitive-sounding body. In fact, The Spectator‘s Political Editor James Forsyth describes it as “nothing more than a Cabinet committee with a fancy name”. The beauty of such a wide membership, of course, is that it makes the true source of a leak much harder to pinpoint. And easier to deny or conceal. Or even misrepresent.

In addition to the justified concerns of our closest allies in the Five Eyes partnership, there’s a substantial EU dimension to all this.

Firstly, taking advantage of the USA’s understandable reluctance, and as Future Cities’ Andrew Williams explained at Spiked! on 2nd May, the EU is trying to insert itself into the position of being China’s non-US ally. It isn’t hard to see which way viscerally pro-EU, anti-Trump, Whitehall Officialdom would lean in that dispute.

Secondly, the concerns about the implications of May’s (non)-“Withdrawal” Agreement for Defence and Security, and the extent to which Britain’s Remainer Establishment are pushing for greater EU control of both, even in the event of May’s strictly-cosmetic Brexit, are deepening as they become more apparent.

The former Head of MI6 has gone on record expressing his grave misgivings at the cession to the EU of UK autonomy, decision-making and control over what he rightly terms sovereign responsibilities, even in the event of our supposed exit from Brussels’ political and administrative structures. . . . 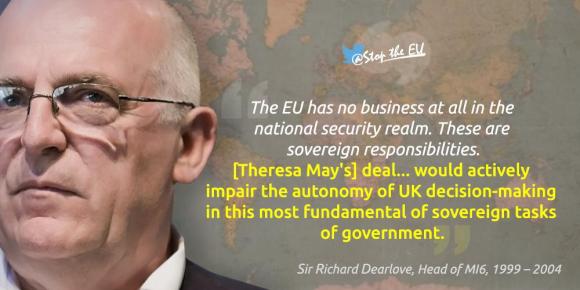 . . . while Veterans for Britain’s briefing document of 29th March leaves little room for doubt, either on the extent to which Whitehall Officialdom, seemingly with May’s full consent, has been augmenting the UK’s enmeshing within burgeoning EU Defence and Defence-related industrial integration, surreptitiously, even since the 2016 EU Referendum’s decision to leave.

The full extent was spelt out in chilling detail by Briefings For Brexit’s Professor Gwythian Prins in a speech to The Heritage Foundation. Despite its 55-minutes or so length, I’d urge you to watch it. It looks beyond dispute that Cabinet Office officials, presenting to EU diplomats with May’s imprimatur, confirmed a direct intention to keeep the UK under EU authority in defence, via the EU’s Common Security and Defence Policy.

Which brings us back to the fragrant Penny Mordaunt, and her unexpected promotion. She was previously a junior Defence minister: so, irrespective of her backing for May’s version of (non)-Brexit, might it not have been reasonable to expect her to have at least voiced some doubts to the National Security Council about the wisdom of embracing Huawei so eagerly, or about the subordination of much of our Defence capability to the EU? Yet in the reports emerging of the NSC’s deliberations, there has been no hint of that.

But – recall how, last Autumn, supposed “Cabinet Brexiteer” Mordaunt was trying to have her cake & eat it too, by making ritual resignation noises but also allegedly asking May to let her publicly oppose and vote against May’s deal in the House of Commons – presumably to impress her constituents – but still remain in Cabinet?

Needless to say, Mordaunt’s resignation “threat” turned out to be empty, and she now appears fully signed up to May’s abominable (non)-“Withdrawal” Agreement. As well, of course, as deploying stock Green hyperbole to parade her impeccably woke credentials. Was she giving a signal? Had she been given a signal? 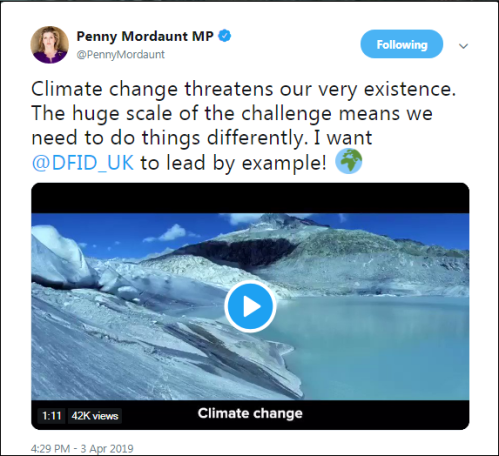 How much May, no doubt prompted by Sedwill, must regard her as a welcome, ideologically-sound, replacement for the increasingly sceptical Williamson, with the additional benefit that, having already once threatened to resign but climbed down, any further such threat, or even an objection, from her would totally lack credibility. She’s effectively, and possibly willingly, been neutralised.

She will be, I suspect, another compliant May stooge in the Karen Bradley mould. Moreover, as she retains her previous ministerial responsibilities for Women and Equalities, apparently the role of Defence Secretary now isn’t even a full-time job. But then again, perhaps it would no longer be one, if May has surreptitiously signed over so much control over our Defence capability to the EU below the radar. 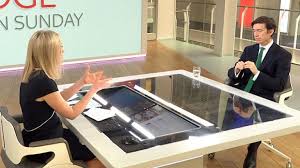 May has gained in two ways. Not only does she remove one, albeit recently-converted and born-again Brexiteer opponent from Cabinet, but she replaces him with a rabid Remainer, Rory Stewart, the sycophant’s sycophant, who this past few days has been unctuously hawking his conscience and obsequiously parading his slavish loyalty around the media studios.

Stewart, as he told Robert Peston last week, believes that that a No-Deal Brexit would be “toxic and unacceptable”, so much so that he would accept any form of managed, agreed Brexit, no matter how diluted or cosmetic it was.

Or, evidently, no matter who it would have to be “agreed” with, either, given his Sunday 5th May pleadings to Corbyn to do a deal with May to pass her execrable (non)-“Withdrawal” Agreement through the Commons on Labour votes and against her own MPs, and his assertions that a split in the “Conservative” party would be an acceptable price to pay to achieve it.

How congenial that must have been to Theresa May, who only last week was treating Labour members of the Commons Liaison Committee with excessive deference and exaggerated courtesy, while treating its Conservative members with undisguised brusque contempt.

Because of the questions still unanswered, and the flat-out contradictions yet to be satisfactorily explained, neither the scandal, nor the story about it, is going to go away any time soon.

In The Sunday Times of 5th May, Tim Shipman posited a link between Williamson’s sacking and the exposure of Cabinet Secretary Mark Sedwill’s intention to lead a Whitehall mandarins’ mission to the Chinese government, without any Ministers. The glaring inappropriateness of such an action, so soon after the Huawei contract award, must have resonated, because the mission was rapidly scotched.

Subsequently, it was claimed, again in The Sunday Times, that the real reason for Williamson’s dismissal was suggestions allegedly made by him to colleagues to the effect that May’s diabetes made her unfit to be Prime Minister on health grounds. That claim has been strenuously denied.

Identifying where the blame truly lies in all such leak scandals, it often helps to ask: Cui Bono? Literally, “to whom is it a benefit?”. The principle that probable responsibility for an act or event often lies with the one having something to gain from it. So should it be with the Williamson/Huawei one. Truth will out.