The Tory Leadership Contest: With Enemies Like These, Can Boris Johnson Be All Bad?

Note: Updated version of the article originally published at The Conservative Woman on Wednesday 26th June 2019

In politics, as in history, there are times when it can be more instructive to judge a person by the identity and nature of their enemies, rather than by those of their friends.

Even for me, who tends to oscillate between varying points on the continuum between agnosticism and atheism, Matthew 5: 11-12  – “Blessed are ye, when men shall revile you, and persecute you, and shall say all manner of evil against you falsely” – increasingly seems to be the most reliable way to assess the avowedly pro-Brexit – on 31st October at the latest and on No-Deal if necessary – Boris Johnson’s campaign for the leadership of the “Conservative” Party.

Scarcely had the result of the 5th ballot in the Tory leadership Contest emerged just after 6.00.pm on Thursday 20th June, narrowly eliminating Michael Gove and pitting the transparently Continuity-May, Continuity-Remain candidate Jeremy “Theresa in Trousers” Hunt against Johnson in the final membership run-off, when the anti-Johnson attacks, from both the official and provisional wings of the Remainstream-Media Punditocracy, started.

Fewer than 200,000 people will decide whether Boris Johnson or Jeremy Hunt will be the UK’s next Prime Minister, averred Shebab Khan of ITV News, curiously ignoring that whether Frans Timmermans, Manfred Weber or Margrethe Vestager will be the next President of the unelected European Commission will be “decided” by fewer than 1,000 people – and those mostly MEPs in the European Union’s Potemkin Parliament with a power largely confined to rubber-stamping the selection probably made merely by the 3 or 5 most influential heads of government of EU member-states.

Next out of the traps was well-lunched political-class media-courtier Adam Boulton, decrying Johnson’s lack of comment, presumably to Sky News, on the leadership run-off, despite the result of the 5th ballot having been declared only about 45 minutes earlier.

Quite why this should be an implied deficiency of democracy in 2019 was not immediately apparent.

“Johnson for PM is Brexit incarnate. Nobody really thinks it’s a good idea. Everybody is embarrassed”, tweeted The Times’ Hugo Rifkind, impeccably bien-pensant epitome of its metropolitan-‘liberal’ stable of irreconcilably-Remainer hacks, before being reminded that there might conceivably be some shades of opinion, somewhere within the country, which could just possibly have eluded his omniscience.

By the evening of Friday 21st May, the breaking news of the police being summoned to an altercation in the flat occupied by Johnson and his paramour prompted author and ardent Blairite Robert Harris to posit an ineluctable link, clearly indicative of Party-wide gross moral turpitude, between that incident, MP Mark Field’s timely ejection of a Greenpeace eco-protester who had gained unauthorised access to a private Mansion House dinner, and the Recall of a Tory MP convicted of expenses-fiddling. 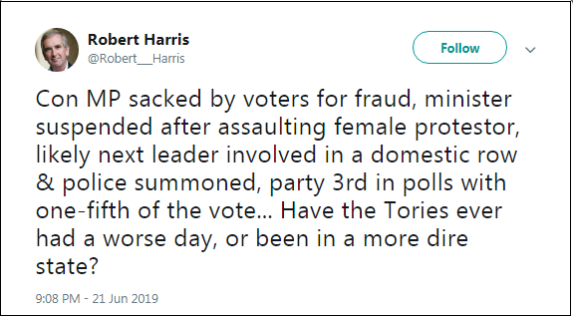 Fortunately, we have some prior indications of Harris’ views on the inadvisability of consulting the contemptible masses on constitutional questions, like membership of the EU, which they are clearly ill-equipped to determine.

Hard on his heels followed Michael White, former Political Editor of The Guardian but now to be found mainly adorning the pages of The Weekly Remoaner, aka the scabrous The New European, clearly somewhat relishing, ironically, the prospect of coverage of a domestic fracas by The Daily Mail, no less, (PS, never mind the factual details) unseating Johnson’s ascendancy to the leadership. 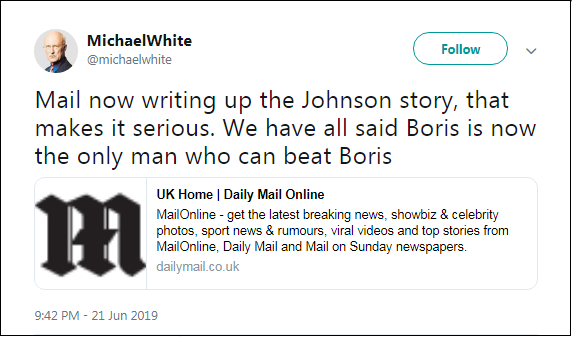 However, White’s relish at the possibility of a lovers’ tiff serving to derail Johnson’s chances paled into insignificance alongside the sight of lugubrious and reliably Remainer-Establishment hack Robert Peston positively salivating at the prospect.

He was followed by the FT’s Jim Pickard, thoughtfully likening people who’d be prepared to take the risks inherent in a No-Deal Brexit, so as to ensure a clean exit and the upholding of democracy – and by inference, therefore, presumed supporters of Johnson – to a mass murderer, rapist & paedophile.

How charming – and revealing. Less of a slip of the keyboard than an indication what the Remainer-Elite really think of 17.4 million Leave-ers?

Next up came no less august a personage than the Editor himself of The Daily Remainer, aloof purveyor of haut-journalisme for the Europhile-Establishment-Elite and otherwise known as The Financial Times, gleefully anticipating the imminent defenestration of the Evil Brexiteer Johnson from the Tory leadership slate.

Yes, you read that right – the Editor of the FT, succumbing to a case of premature exhilaration at the hands of The Guardian’s Media Editor.

Barber was at it again early on the Saturday morning, evidently having commissioned a waspish hit-piece about prominent Tories’ days at Oxford: clearly an infallible guide to the fiendish ability of one of them, 30 years later, (but strangely not the other) to inveigle 160,000 Party members into voting for National Self-Destruction and The Collapse Of Civilisation As We Know It.

The 2016 Remainers were almost all PPE-ers, it will inform you, having “chosen the degree in search of the cutting-edge knowledge needed to run a modern country”, while most 2016 Brexiteers “studied backward looking subjects” (no bias there, obviously): and that there is, apparently, “a curious parallel between the 1980s Oxford Tories and the 1930s Cambridge spies”.

Which might strike you as an odd analogy, to say the least, given which of the two groups now prides itself on its allegiance to the unelected supranational Brussels technocracy, and which of them advocates the supremacy of sovereign nation-state Westminster democracy.

The prints soon caught up with the tweets, and have continued to do so. History will wonder how we trusted Boris with Britain, agonised Sir Max Hastings in The Spectator, before vouchsafing to readers of The Guardian that Johnson is utterly unfit to be Prime Minister – which I suppose is as near to preaching to the converted as it’s possible to get.

Now Sir Max is a very fine historian, several of whose books are to be found on my shelves, but also an implacable Establishment-Remainer. I wonder why he felt it expedient to omit, firstly the reason, if Johnson was so useless, for employing him for so long when Editor of The Daily Telegraph: and secondly, why he so enthusiastically backed Johnson’s 2008 campaign to become Mayor of London?

Lower down in the journalistic pond, among the bottom-feeders, come coarser, rather more dubious fish. This tape will always threaten Boris Johnson, insisted James Kirkup in The Spectator, signally failing to predict that the opprobrium resulting from it would instead be poured in bucket-loads over the deserving heads of the insalubrious, foul-mouthed, EU-subsidised, Lefty-Luvvie Remainers who recorded it and then, having been told by the Police that the domestic fracas in the flat below had involved no harm or offence and thus merited no further action, thoughtfully sent it to The Guardian. As you do.

Finally, and yet again in The Spectator (hardly the Boris-sycophantic lickspittle of Leftist myth, is it?) came the curmudgeonly Alex Massie – a misanthropic Caledonian whom, to paraphrase P G Wodehouse, it is seldom difficult to distinguish from a ray of sunshine – pontificating that Boris’ backers “have a lot to answer for”. I guess that might be true if you regard presiding over the retrieval of self-governing nation-state democracy as a crime warranting almost incarceration in the Tower.

All the above represents only a small selection of the myriad examples available from the anti-Johnson – and by proxy, anti-Brexit – mass pile-on which followed the disclosure of the Tory leadership race’s final two. Readers will doubtless have their own examples.

Which brings up back to Boris Johnson and Matthew 5: 11-12, about being judged by the extent to which your enemies revile you. Is this a case of “By their enemies shall ye know them”?

With such an egregious line-up of the Great and the Good of the anti-democratic, referendum-denying, Remainer Establishment-Elite ranged against him in ire and indignation, can Boris possibly be all bad? Because the more they fulminate and plot against him, the more grows the suspicion, even in the minds of the initially sceptical, that, in spite of his evident flaws and drawbacks, you know what? – he might just be exactly the man for the job.