Both on the water and off it, Greta Thunberg’s attention-grabbing transatlantic voyage just ended has been nowhere near either so Green, or so altruistic, as it’s been trumpeted

Note: Longer and updated version of the article originally published at The Conservative Woman on Tuesday 20th August 2019

On Wednesday, 14th August, in a blaze of unremittingly fawning publicity and uncritical adulation of which even Moses descending from Mount Sinai with the tablets bearing the Ten Commandments would have been envious,  the good ship Mazilia – or, as I prefer to call it in view of its quasi-religious mission, ‘Greta’s Ark’ – set sail from  Plymouth bound for New York, carrying no less a personage, if you believe the Green hype, than the Eco-Messiah and putative Saviour of the World, diminutive, pig-tailed teenage ‘climate activist’ Greta Thunberg.

There’s much about this stunt and its main protagonist to mock. But just for the purposes of this article, ignore for a moment both the appalling cynicism in egregiously exploiting a clearly troubled and vulnerable child to advance an eco-totalitarian political agenda, and the fact that very few us can whistle up a $4 million, 18-metre yacht from Prince Albert of Monaco at short notice, and then spend two weeks crossing the Atlantic to assuage our enviro-guilt, rather than catching a 7-hour flight.

And instead, consider just one question:

Precisely how Green has been The Blessed Greta’s supposedly planet-saving maritime odyssey?

Initially, let’s hopefully forestall any potential criticism for mixing up the terminology. Carbon dioxide (CO2) is a colourless, odourless 0.04% trace gas essential to all plant life on Earth. It’s also invisible – though that, apparently, has not stopped Greta’s mother, a well-known Left-‘Liberal’ activist called Malena Ernman, from claiming her daughter is actually able to see CO2 with the naked eye. Truly do the righteous have bestowed upon them gifts denied to the rest of us.

Carbon (C) on the other hand, is the predominant element in coal. Which is why the Green movement always uses the language of ‘carbon’-footprint or ‘carbon’-free, when they actually mean CO2. Because in the public mind, carbon is nasty black stuff, isn’t it, while wanting, on spurious scientific grounds, to reduce the Earth’s capacity for plant and crop growth perhaps isn’t a good look.

First, how did Greta actually get to Plymouth? On foot? By bike? On a magic carpet borne aloft by unicorns? Or perhaps, more prosaically, not by ‘carbon’-free means at all, but by using the same fossil-fuel powered transport that we’re enjoined to eschew on pain of eternal eco-damnation?

Next, Greta’s Ark required the assistance of other vessels to un-dock it and tow it out of Plymouth. Curiously, this was accomplished, not by several longboats manned by brawny matelots lustily belting out a traditional sea-shanty as they heaved away at the oars, but by a couple of RIBs. These may have electric engines, but ‘carbon’-free their production ain’t.

Let’s look at the supposedly ‘zero-emissions’, ‘carbon’-free yacht itself. It’s actually built of carbon fibre. (Remember, we sceptics aren’t the ones who started the misuse of scientific terminology for political effect). Now, the production process for building a carbon-fibre yacht is estimated to be around 14 times as energy-intensive, and thus in ‘carbon’, i.e., CO2, emissions, as that for building one of equivalent length in steel. Not only that: the epoxy resins used in Greta’s Ark’s construction are different and are all organic materials made from petroleum and significant amounts of natural gas.

Some intriguing revelations about the crewing arrangements emerged soon after departure. It turns out that the westbound crossing crew will be flying back from New York to Europe, while the replacement crew will be flying from Europe to New York for the eastbound return passage. 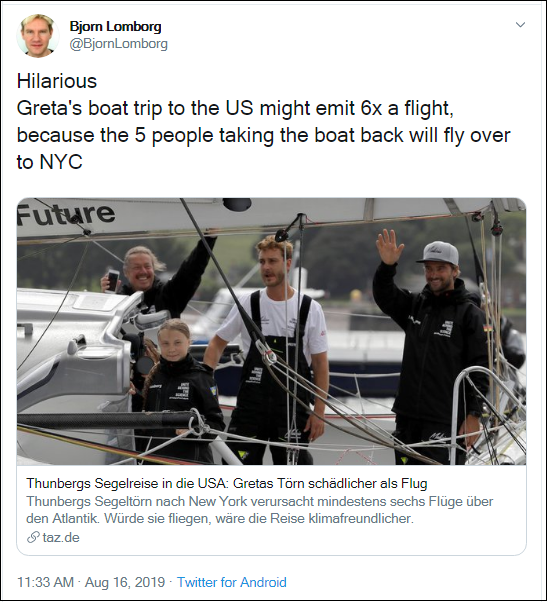 So that’s several transatlantic flights for Greta’s Ark westbound crew to return from New York, plus several more for its replacement eastbound crew to get to New York. I’m guessing those flights won’t be in Economy, either. So what’s their ‘carbon’-footprint? Why can’t she just fly to New York with her father? Or even address the United Nations via Skype? Not all that Green after all, evidently.

Even though this eco-boondoggle has its own website on which the yacht’s progress can be tracked, some of us prefer to use independent sources of information for verification. So it was some surprise to see that, last Friday, on the Marine Traffic website, it appeared that the yacht’s position had stopped being reported at 0132 BST on Thursday morning, a mere 9½ hours after leaving Plymouth, and still identifiably within the English Channel’s Western Approaches.

Which at the time struck me as slightly odd: as did the fact that, as far as I know, there were no news broadcasts from the air filming the yacht at sea. Given the obsequious near-24/7 coverage pre-departure, wouldn’t one have expected at least Sky News and the BBC to have arranged that, when the yacht was still only about 1½ to 2 hours flying time at most from either Cornwall or Brittany?

Add up the ‘carbon’-intensive construction of the boat and the ‘carbon’-footprint of all those crew flights, and suddenly this venture doesn’t look anything like as Green as it’s cracked up to be. But in this grotesque inversion of the fable of The Emperor’s New Clothes, woe betide us if we say so.

It sheds an interesting light on making an immature 16 year-old with a problematic mental history the poster-girl for incipient eco-totalitarianism that Green-Left inclined adults – many of whom insist in a different context that 16 year-olds are mature young adults with well-formed political views who should have the right to vote – are in contrast saying of the 16 year-old Greta Thunberg: “She’s just a child! You can’t criticise her!”

But this is to note only at basic level the effective weaponisation of Thunberg. Despite her history of cognitive, emotional and developmental disorders, her celebrity parents have encouraged the view that her mental health problems are owed to the world’s alleged environmental crises. In other words, if she has some kind of obsessive disorder, then it’s all our fault. It’s a valid question to ask, therefore, why those who have nominated her to speak have chosen to hide from criticism behind such a fragile figure.

Behind her is a well-connected and well-off family whose business is ‘climate change’, and, linked to them, is a rather more publicity-shy cabal of Green lobbyists, PR-hustlers, eco-academics, and a think-tank founded by a wealthy ex-minister in Sweden’s Social Democratic government with links to the country’s energy companies.

Along with investors and those energy companies, they are all preparing to profit from the biggest Green financial bonanza of government contracts in history: the greening of Western economies. And Thunberg, via her parents and whether they realise it or not, is the fortuitously discovered poster-girl, the face of, and vehicle for, their carefully-devised political and business strategy.

For them, ‘saving the planet’ in effect means government contracts to print money by selling the rest of us extremely expensive energy. Thunberg is being used to ease the transition to a Green crony-corporatism of technocracy not democracy, and profit not redistribution, deploying Green-energy lobbyists employing populist tactics and a children’s crusade to bypass elected representatives.

But the sacerdotal reverence with which this entire cynically exploitative eco-stunt has been and is being treated, and the invective heaped on those who dare challenge it, either on its own ostensible purposes or its underlying motives, is in many ways an ideal metaphor for how deep-Green ideology has now acquired all the characteristics of a, albeit post-Christian and secular, religious cult.

Like other pre-Enlightenment belief systems, it posits a prelapsarian state of grace, a pristine, innocent, nature-harmonious Rousseau-ean past which has been corrupted by modernity, industrialisation and capitalism, notwithstanding their having wrought in just 250 years an improvement in the human condition unprecedented in previous millennia.

It holds that the restoration of environmental equilibrium, the reversal of Man’s Fall from the Garden of Eden, requires, above all, sacrifice and submission to an elite, who will dispense indulgences  – in the form of ‘carbon’-credits – to the fallen, absolving them of their eco-sins, while intolerantly silencing and excommunicating the heretics.

Coincidentally, perhaps, from Salt Lake City, Utah, the true aims of the deep-Green ideology for which Thunberg is such a superficially compelling poster-child for the gullible have started to emerge.

There, this week, the United Nations is hosting its 68th “Civil Society Meeting” of some 5,000 attendees drawn from some 300+ NGOs and representatives from 80 countries – no qualms about ‘carbon’-footprints for them, obviously – currently busy devising strategies how to better promote and impose UN “sustainability goals” in their communities.

Or, in other words, radical Green policies to redistribute wealth and power from individuals, communities and national legislatures to un-elected, unaccountable and authoritarian global bodies. The strategies on the agenda include:

If the contradictions behind the Odyssey of Greta’s Ark help more people to see more clearly the true – not nature and planet conserving, but power, wealth and freedom grabbing and coercively redistributing destroying – aims of the simultaneously enviro-authoritarian and Green-corporatist ideology she’s being calculatedly exploited into promoting, then it may yet prove beneficial. Though mercifully not in the sinister way it’s intended to.

2 thoughts on “The Not-So-Green Greta’s Ark”