Note: This article was originally published at The Conservative Woman on Saturday 28th September 2019

From the instant Remainer reaction of knee-jerk outrage when last Tuesday’s Supreme Court Judgment, ruling that the prorogation of Parliament had been unlawful, was criticised as a “constitutional coup d’état”, one always suspected that there was actually something in that criticism.

That the Supreme Court’s Judgment reversed the earlier verdict of the High Court that prorogation was essentially political and thus not justiciable – a verdict reached by a panel comprising no less than the Lord Chief Justice, the Master of the Rolls, and the Chairman of the Queen’s Bench Division, all of whom rank superior to Supreme Court Judges in the Judiciary – did nothing to ameliorate it.

As the week has gone on, that suspicion has grown. As one of the better analytical commentaries showed, the Judges took it upon themselves to rectify an absence relating to prorogation in the body of Parliament-made Statute Law by first arrogating to themselves the law-making power vested in the elected legislature, and then making it themselves in effect under Common Law. Previously, all constraints on the Executive’s prerogative power of prorogation were statutory.

Moreover, by effectively substituting its own judgment (of what constituted ‘good political reasons’ for prorogation) for that made by the Executive, and then evaluating the actual prorogation against its own criteria, the Supreme Court inserted itself into the political process. But as Lawyers for Britain’s Martin Howe QC pointed out, for a court to determine whether an issue of high government policy is good reason or not presents it with an insuperable difficulty. How can it know what was or was not in the government mind?

The  implications for the Constitution, already creaking from a Remainer Parliament’s tangible unwillingness to accept and implement the outcome of the 2016 EU Referendum, and democracy itself, are momentous.

As Spiked’s Jon Holbrook says, there is now no political issue on which the judges are not prepared to rule: if an exercise of the prerogative power to prorogue Parliament can be set aside by judges, then almost any political decision can be. The effect of which is, as Gerald Warner so trenchantly explained at Reaction, is, to all intents and purposes, to deprive Britain of a functioning government under a constitutional monarchy. In the words of the Daily Telegraph’s Philip Johnstone, Britain has become a republic with Bercow at its head. 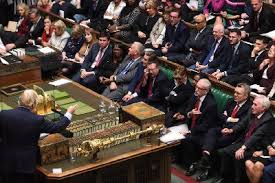 Which brings us back to our dysfunctional current Parliament. Having passed the Benn-initiated Surrender Act which, by requiring an Article 50 extension request be submitted should no deal be agreed with the EU Council meeting on 17-18 October, was effectively both an open invitation to the EU not to agree any deal, and a total shackling of both of the Prime Minister’s negotiating hands behind his back, what will it do next?

I suspect Parliament’s Remainer-Leftist so-called Rebel Alliance will, with Speaker Bercow’s enthusiastic collusion, seize control of the Parliamentary agenda via Standing Order 24 and then, again using an accelerated procedure to ensure all three Readings in one day, amend the Benn Surrender Act (or Appeasement Act, if you prefer).

The amendment would be to bring forward, to a date before the EU Council meeting on 17-18 October, the date by which Boris has to come back to Parliament with a deal the Commons would approve. The effect of this, of course, would be to tie his hands even more.

The additional baleful consequence which is starting to be dimly discernible in the wake of the Supreme Court’s ruling is this: if (as I personally believe they have) its Judges have indeed carried out a constitutional coup d’état by arrogating more political power to themselves – by in effect inventing a convention that Prorogation is justiciable, even though Parliament has passed no Statute limiting or restricting Prorogation – then one wonders whether even Royal Assent to bring a Bill into law, or more crucially perhaps, Royal Assent to a dissolution of Parliament, might itself be justiciable.

The terrible spectre of, in extremis, a Remainer Parliament legislating to amend or repeal the Fixed Term Parliament Act so as to perpetuate its own existence, followed by the refusal on the advice of the Prime Minister of Royal Assent to it, being itself justiciable and liable to be overturned by a politicised Supreme Court, is no longer unthinkable. At that point, democracy is dead.

With this week’s Supreme Court ruling, mass-participation democracy has in effect ceased to be the foundation of our political society: it has become, instead, merely an obstacle to be circumvented by the anti-democratic, either those in Parliament or those with the deepest pockets and most influential connections, whenever they are defeated in a popular vote.

That the central political issue of our time is now that of The People versus The Establishment has become starker than ever. By its ruling, the Supreme Court has ensured that the next general election will be about one thing and one thing only: The People against Parliament and The Establishment.

A self-respecting Labour Party would be up in arms about this. Keir Hardie and Tony Benn must be spinning in their graves. The purported party of the working-class, cheering on the well-connected and the monied as they overturn the biggest democratic mandate in UK political history.

There has been much lofty comment this week, mainly from the ‘Liberal’-Intellegentsia, about a proper re-setting of the delicate balance of power between the Monarchy, the Government and Parliament which the Supreme Court’s Judgment presages. There has been much also, from the same sources, about the reinforcement of Parliamentary sovereignty.

Less mentioned, curiously, has been the awkward fourth element in our political settlement. The People, in whose name the aforementioned triumvirate of powers professes, unconvincingly, to govern, but from whom Parliament derives its sovereignty in the first place.

Earlier this week, Brexit Party MEP John Longworth wrote lucidly about how the conflict between two competing philosophies of government and society, a conflict dormant but still unresolved since the Civil War, has been revived by by the Brexit vote and its aftermath. It is worth reading.

It’s worth recalling, too, that full universal adult franchise was not achieved until 1928, despite the Great Reform Act being dated 1832, such is successive generations of the Establishment-Elite’s determination not to yield its political power to the demos it considers unworthy to exercise it. That Democracy lasted under 100 years before we reverted to oligarchical rule is no longer inconceivable.