Note: Longer and updated version of article originally published at The Conservative Woman on Wednesday 25 March 2020

As mainstream and social media reports of selfishly excessive panic buying and empty shelves in anticipation of government restrictions to control the spread of Coronavirus exploded into a major issue in itself last week, the public relations departments of major UK supermarkets were eager to reassure the public about continuity of supply and ease of access for elderly or otherwise vulnerable customers.

However, as stories proliferated of hoarders failing to respect so-called ‘elderly hours’, or clearing the shelves in advance of them unimpeded by supermarket staff, it was hard to avoid the impression that some supermarket chains were making ‘caring’ announcements for publicity purposes, but then doing little either to enforce them or even notify their staff of them.  That certainly appeared to be the case with one alleged ‘elderly and vulnerable only’ queue in Leamington Spa.

Less obvious was any great detail about the extra precautions they intended to take to prevent the spread of infection on their premises, although Aldi promised to instal clear screens at checkouts to protect employees and customers, and Tesco pledged to introduce distancing methods at checkouts to reduce customers’ infection risk.

Not before time, either: as one writer of a Letter to the Editor of a national newspaper put it, ‘Precisely how can we keep our distance while needing to shop for food?‘ 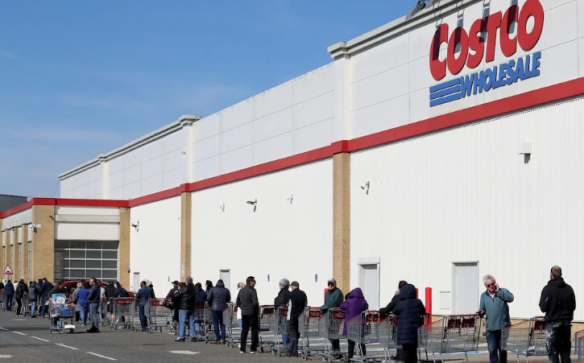 In addition to that, reports had already been circulating on social media from disgruntled employees about businesses being cavalier, to say the least, about protecting even their own staff.  The example below is graphic, but by no means untypical. Read the entire thread.

Working in @Waterstones today following the lockdown. No hand sanitiser provided, no wipes, no disinfectant, no reduced shop hours, cash still being accepted. We’re being told by head office that gloves and masks are not permitted, meanwhile administrative staff…(cont.)

So it was not without slight trepidation that, early last Saturday morning, I found myself contemplating a potentially hazardous expedition into dangerous territory, aka the local branch of Waitrose.

Now, as soon as the seriousness of the COVID-19 epidemic first became apparent, a local wine merchants not far from my home had been quick to react.  They emailed their entire customer base to say that, with immediate effect, they would provide mandatory-use hand-sanitiser and hand-washing facilities at the entrance to the store, have all trolley handles disinfected after each use, move temporarily to exclusively non-cash transactions, and hygienically wipe credit card machines after every sale.

Surely, I thought, I could expect similar precautions to be in place at a busy branch of a national, and generally regarded as up-market, supermarket chain?

Nope.  Despite my arriving within 15 minutes of opening time, the Waitrose Head Office-announced ‘The first hour of business is now dedicated to elderly and vulnerable shoppers‘ policy was nowhere to be seen.  Neither were any hand-sanitising facilities, nor even requests for customers to use the adjacent washrooms for that purpose, in evidence.  As for trolley handles being sanitiser-cleaned before re-use, forget it.

Notwithstanding all the reassuring corporate PR from Head Office, anti-coronavirus precautions within the store looked almost non-existent – although, in fairness, apart from pasta and rice, the shelves were reasonably well-stocked, and anti-excess-buying measures were visibly being enforced.

But not much else.  At one stage, standing no further than one to one-and-a-half metres away from me and half-blocking the aisle, was a young woman staring vacantly at her phone (and not at a shopping list on it either, because she had a written one) while treating everyone in her immediate vicinity, including her two- or three-year-old daughter perched on her shopping-trolley child-seat, to the sound of her rasping dry cough.

At that point I began to feel seriously relieved at my decision to wear nitrile surgical gloves because of the potential for infection from trolley handles, tins, credit-card machines and the like. Apparently, the virus can linger for up to 72 hours on a hard surface.  OTT, maybe, but why take the risk when it’s there but easily avoided?  Some other customers were wearing surgical gloves too, but we must have been in a minority of 5 per cent at the most.

Which minority, remarkably, evidently did not include the servers at the in-store bakery, delicatessen, butcher and fishmonger.  The server on the cheese counter went to cut me a wedge of whatever cheese it was, unwrapping it with his bare hands, and not wearing gloves at all.  I told him to keep it.

Neither did I see any of the checkout operators using gloves, although the Saturday-job youth on the one which I used looked a touch guiltily at my own, then sheepishly produced a pair of latex surgical gloves from beneath his till and put them on.  Had they, I wondered, been issued to till operators, but no-one was verifying that they were actually being worn?  No problem either, with any cash-and-change transactions there if you wanted, and not a hint of credit-card terminals being hygiene-wiped afterwards.

On reaching home, my outer clothes made it straight into the washing machine.  I made it straight into the shower, despite having already showered before leaving.  The nitrile gloves didn’t even make it as far as home.  On the way from the trolley-deposit bay back towards my car in the car park, they went straight into a (closed) rubbish-bin.  And some answers to questions about how the virus had managed to wreak so much devastation so quickly as it spread outwards from Wuhan, China, were much clearer.

UPDATE: This article was written on the afternoon of Monday 23rd March. On Tuesday (24th), a friend visited a different Waitrose branch in my locality.  In the period from Saturday (21st), they had obviously started to get more organised. There was a one-in, one-out policy in operation to limit the numbers shopping at any one time, free disposable gloves were available, and 2-metre distance-markers had been placed at checkouts, and enforced.  Better late than never, perhaps.