Despite the near-universal praise it attracted, the former PM’s intervention in the latest Commons lockdown debate arguably owed more to low politics than high principle

Note: (Slightly) longer and updated version of the article published at The Conservative Woman on Tuesday 10 November 2020.

Credit where credit’s due. In contrast to her usual Maybot-style wooden, robotic, delivery of leaden, uninspiring content, former PM Theresa May’s speech, delivering a scathing criticism of aspects of the Johnson Junta’s second Covid lockdown, in the House of Commons’ debate on the afternoon of Wednesday 04 November, was, for once, uncharacteristically good.

Moreover, its impact was enhanced by PM Boris Johnson’s somewhat boorish reaction to it. By ostentatiously walking out of the Commons Chamber, to the audible disapproval of his MPs, just as May began to speak, Johnson not only demonstrated a puerile petulance but also demeaned both himself and his office.

He later apologised, apparently, pleading the need to attend a meeting. Well, maybe; and should not May, out of office now for only 15 or 16 months, also not have realised from her own experience that a PM necessarily has a very busy schedule? All the same, and though I’m no fan of May, she is after all a former PM, albeit an especially dire one, so was surely entitled to be listened to for four minutes by the present incumbent, if only out of courtesy.

Anyway, near-universal acclaim, some of it verging on the hyperbole, greeted May’s speech. According to the Daily Telegraph’s chief political correspondent, it was a case of “May leads the charge” against Johnson’s second coronavirus lockdown. This was intriguing, to say the least, to those, like me, who have long felt that leadership, on the one hand, and the notoriously uncommunicative and taciturn Theresa May, on the other, are such mutually incompatible concepts as to constitute an oxymoron.

She had become the unlikely “Joan of Arc of lockdown scepticism“, in the eyes even of former Brexit Party MEP Alexandra Phillips, who was at least discreet enough not to mention that Jeanne d’Arc ended up taken prisoner by her own side before being burned at the stake by the English.

Prominent and respected political tweeters were effusive in their praise. 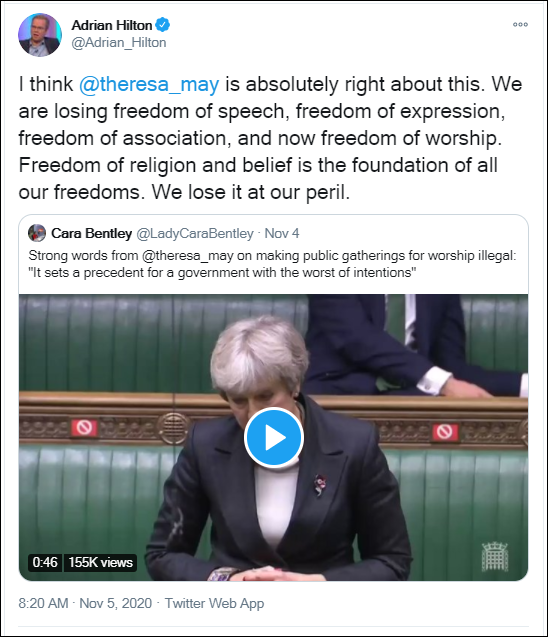 But, watching and listening to May’s speech live, I had some niggling doubts, and then especially later when reading it on Hansard, I found myself starting to wonder: just where had this apparently quasi-libertarian Theresa May, suddenly concerned about the loss of Britons’ economic and societal liberties as a result of Lockdown 2.0, sprung from?

“The Government today making it illegal to conduct an act of public worship….sets a precedent that could be misused by a Government in future with the worst of intentions.”

Very true. But was this the same Theresa May who, as a reluctant-Brexiteer PM, unnecessarily pledged to keep the UK within the scope of the illiberal, authoritarian European Arrest Warrant, despite its jurisdiction expiring on Brexit? Was it the same Theresa May who, as a closet-Remainer Home Secretary for most of the relevant period, had presided over the UK executing more EAWs than any other EU country?

“For many people ​it looks as though the figures are being chosen to support the policy, rather than the policy being based on the figures. There is one set of data that has not been available throughout.”

Again, very true. But was this valid criticism about the lack of both published data and transparency really coming from the same Theresa May who, again as that reluctant-Brexiter PM, presided over the covert No. 10 operation to collude with German Chancellor Angela Merkel in her infamous Chequers Plan for an ultra-lite BRINO, keeping it secret from her Cabinet, the Brexit Department, her MPs, her Party and the British public, and bounce it on to her Cabinet on a ‘take it or leave it’ basis with barely an hour’s prior notice?

Were we really seeing a new, changed Theresa May?  No, alas we weren’t. Because at 10.30.am last Wednesday, a mere 3 hours 8 minutes before she rose to speak in the Commons at 1.38.pm, May had tweeted thus: 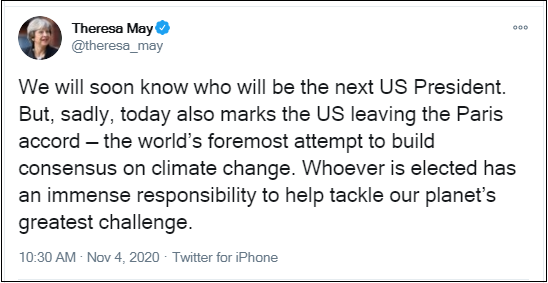 This, I suggest, was, and is, the authentic voice of Theresa May and the one with which we’re more familiar. Her instinctive reverence for unaccountable supranationalist bureaucracy self-insulated from the need to secure democratic consent. Her disregard for the astronomical cost to Western economies, energy users, and taxpayers of a predicted reduction in temperatures of a mere 0.05°C, and then only by 2100.

Her arrogant presumption that truth on ‘climate change’ is something to be negotiated via political consensus rather than discovered by strict adherence to Popper’s scientific method. Her delusion that challenges like a global pandemic and economic downturn, burgeoning government deficits and debt, and Islamist-Jihadist terrorism somehow pale into relative insignificance alongside a gentle 200-300 year recovery in temperatures from the nadir of the Little Ice Age.

So why the quite remarkable contrast between the allegiance to anti-democratic globalism confirmed by May’s 10.30.am tweet and her professed deep concern for personal liberty and government transparency expressed in her 1.38.pm Commons speech?  Let me suggest a two-word solution: Boris Johnson.

I suspect May’s Commons criticisms, entirely valid though they conveniently were in context, originated not so much from principle or genuine ideological conviction as from a long-simmering personal pique at her 2019 forced removal from office, which she still appears to think was an unconscionable injustice and thus still has some scores to settle.

After such a focussed, if richly hypocritical, attack on the Johnson-led Cabinet, one might have expected May to join the rebels who voted against the Government’s second lockdown. Curiously, in the event she didn’t, but merely abstained.

Was she anxious to spare the Government from the political embarrassment of a former PM joining a backbench rebellion? Unlikely, surely, after roundly criticising it from the green benches. Was it too much for her inherent authoritarian-statist instincts to side with the lockdown sceptics in favour of freedom? Or was it just a case of wanting to wound, but afraid to strike?

Whichever, Hell, it would seem, still hath no fury like a former PM scorned.