Could 2020’s Remembrance Sunday have been the last that Britons were officially allowed to commemorate?

As if attempting to curtail every aspect of our economic and social lives that it can get away with – under the guise of protecting us from a virus that’s apparently so lethal, it can:

but which simultaneously is also so non-lethal that it has a fatality rate of under 1% – wasn’t enough.

The Johnson Junta has now seen fit to try and dilute the way in which we’re allowed publicly to commemorate our war dead.  In advance of this year’s Remembrance Sunday, it first decreed that, under its new Lockdown rules, military veterans would be criminalised if they attempted to attend services inside churches, on pain of risking a £200 fine.

Perhaps some within No. 10  – one in particular of the Quad of Covid Ministers springs to mind – were even anticipating that some of the more elderly and infirm among them might contract and subsequently succumb to a respiratory disease outside, which could then be cited to validate its lurid predictions for Covid deaths statistics in the absence of another Lockdown, and thus justify it.

To ensure that bands of marauding veterans did not take the law into their own hands, two days later the Johnson Junta ordered local councils to “discourage the public from paying their respects on Remembrance Sunday“. That’s “discourage” as in slap a £200 fine on any member of the public guilty of the heinous (soon to be deemed anti-Woke?) crime of honouring the nation’s fallen in battle.

To make sure its edicts were not flouted, the Junta deployed its tame heavies. The increasingly politicised London’s Finest were there – dutifully masked of course – to cordon off Whitehall. 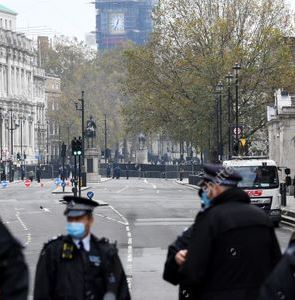 And although the lone Scottish piper subsequently admitted he had hoped to provoke a police reaction, what a sad sight it still was to see the phalanx of the Met’s muzzled myrmidons blocking his path to the Cenotaph and a traditional lament to the fallen. 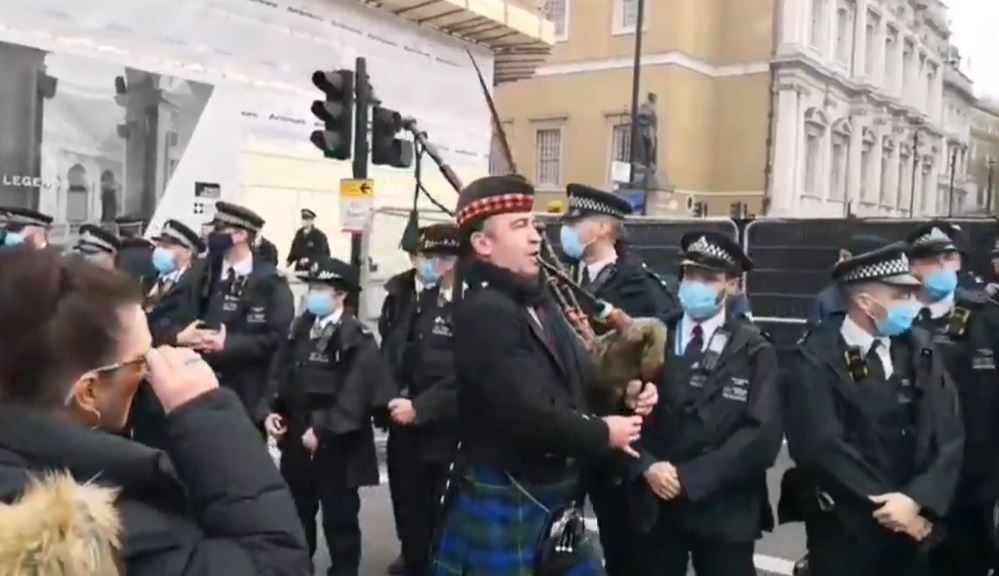 How heartening it was in contrast, though, to read of so many small town and villages quietly complying only to the very minimum with the Johnson Junta’s authoritarianism, and refusing to be thwarted in honouring their, and therefore our, war dead.  To quote the Daily Telegraph’s Charles Moore:

“Our village gathered in excellent (though socially distanced) numbers for Sunday’s customary commemoration. We surrounded our memorial, which was designed by Herbert Baker and opened by Rudyard Kipling a century ago. As usual, each man from the village killed in either of the world wars was named and an individual cross with a poppy was laid for him.”

Contrarian though he can sometimes be, it was difficult to argue with the verdict of Mail on Sunday columnist Peter Hitchens – that the clowns who in effect cancelled Remembrance Sunday in all but name should never be forgiven.

It’s possible of course to downplay all the above restrictions as relatively minor in the circumstances – even though they curtailed what is a totemic event in our national life – and, taken in isolation, not significant in themselves.

But when taken together with the capitulation of the National Trust to Black Lives Matter ideology and the divisive politics of identitarian, racialised-history, and the Woke-Left BBC’s oikophobic attack on the Last Night of the Proms, it’s also possible to see a Government-forced attenuation of something as emblematic as Remembrance Sunday as another assault on our culture.

And so it occurred to me: would it really come as a surprise if 2020 turned out to be the last Remembrance Day we were officially ‘allowed’ to commemorate at all?

At the risk of parachuting head-first into tinfoil-hat, conspiracy-theory territory here, I’m going to go out on a limb and say: no, it wouldn’t. For two reasons.

First, already we’ve had politicians musing about lockdowns continuing into 2021, and, earlier this year, so-called ‘experts’ musing about coronavirus distancing continuing even into 2022. The political, academic and media classes regale us constantly with talk of the ‘New Normal’, under which we’re being conditioned to accept less freedom and more constraints on our liberties.

Second, continuing Covid-related lockdowns and even sub-lockdown restrictions could provide convenient cover for our craven political class – most of which, including much of the allegedly ‘Conservative’ Party is either in thrall to Woke-Left cultural marxism or lacks the intellectual wherewithal or political courage to counter it – backed by swathes of the similarly inclined media, cultural & academic elites, to ‘review’ the continuing ‘appropriateness’ of Remembrance Sunday now that the 100th anniversary of its first iteration has been passed.

A year ago, who would have predicted that not only had a substantial majority of the British public been scared into supporting the biggest, most authoritarian State power-grab of their economic and societal liberties in peacetime, but appreciable numbers would even feel the State’s power-grab had not gone far enough?

2020 could be merely a precursor. The cancellation of Remembrance Sunday could be closer than we think. I sincerely hope I’m wrong, but fear I might be right.