Note: longer and updated version of the article originally published at The Conservative Woman earlier on Friday 4th January 2019

Until comparatively recently – say, the last ten years or so – “populism” was a relatively neutral descriptive label, confined mainly to textbooks and dictionaries of political science.

Even my own well-thumbed copy of Roger Scruton’s Dictionary of Political Thought (3rd edition, 2007) discusses it primarily in the context of the Russian Narodnik movement and the late 19th century US Populist Party. In the 1950s, it was applied most frequently to the French Poujadistes, the union of small shopkeepers and artisans which campaigned against most forms of large-scale development and industrial modernisation. Even in 2007, Scruton alluded only briefly to the early stages of its current pejorative usage.

Since about 2013-2014, though, it’s been resurrected, to be deployed in a different way by the ruling – not only political but also media, corporatist, academic and cultural – Establishment-Elites who see their continued hegemony threatened by it, especially when, as with Brexit, Trump, and growing success by anti-EU parties in Europe, it produces electoral outcomes not to their liking.

“Populism” is now the anti-democratic, globalist, ‘Liberal’-‘Progressive’ Oligarchy’s preferred term of disparagement for the growing politics of pluralist mass democracy based on self-governing nation-statehood, one that rejects rule by unelected and unaccountable supranational technocracy.

It’s about this movement that political scientists and academics Matthew Goodwin and Roger Eatwell have written in their new (late October 2018) book “National Populism: The Revolt Against Liberal Democracy”, trying to explain its origins, its central tenets, and its prospects. It’s worth recalling, in passing, that Goodwin especially has elsewhere made a persuasive argument that Britain’s EU Referendum result, which so shocked the overwhelmingly pro-EU Establishment-Elite, had been “baked-in” for several years previously.

Contrary to the assumptions of its contemptuously-dismissive opponents, the movement isn’t new. Goodwin and Eatwell show how its genesis pre-dates the 2007-08 financial crisis and the subsequent recession. However, they also argue convincingly that both events, and especially the globalist ‘Liberal’-‘Progressive’ Oligarchy’s policy-responses to them – hardship for those on low and middle incomes via austerity and greater job insecurity, but asset-value protection or even enhancement for the already wealthy via ultra-low interest rates and quantitative easing – generated an increase in inequality and sense that the economic system was skewed in the Oligarchy’s favour, both of which significantly enlarged the political space for the movement to fill.

Nor is it, as its detractors lazily claim, a movement composed solely of old, white, men. In the USA 2016 Presidential election, not only did 53 per cent of white women voters vote for Trump, but 43 per cent of all women voters opted for Trump. Between 1988 and 2017, the percentage of French female first-time voters who voted for one or other Le Pen nearly quadrupled from 9 per cent to 32 per cent. Greece’s anti-EU Golden Dawn party drew significant support from the young who felt their prospects were deteriorating. Clearly, something other than the Liberal’-‘Progressive’ oligarchy’s lazy, clichéd, prejudices was, and is, at work.

Goodwin and Eatwell identify what they call The Four D’s – the historic shifts, the long-term trends which are a growing cause of concern for millions and which are driving the movement: and which, being structural, are unlikely to fade or dissipate, or be assuaged, in the near future.

First, Distrust – the way in which the elitist nature of ‘Liberal’-‘Progressive’ democracy, forever seeking to minimise the opportunities for meaningful participation in it by the masses, has promoted distrust of politicians and institutions on the part of millions who feel they no longer have a voice in the national discussion.

Second, Destruction – particularly the perception that culturally-‘liberal’ politicians, unaccountable supranational bureaucracies and global corporates are eroding, not only traditional communities, but also national identity and societal cohesion, especially via encouraging historically unprecedented rates of mass immigration, while politically-correct agendas strive to silence any expression of opposition.

Yet this isn’t channelled into racism or xenophobia, but into demands that immigration be controlled by democratic consent, that the pace of immigration be slowed, and crucially, that it be accompanied, not by non-judgemental, relativist, divisive, separatist multiculturalism, but by assimilation and integration. Notable in the chart below is how, on both sides of the Atlantic, people say that immigrants adopting the national language and sharing the national customs, values and traditions are far more important factors than their birth-nationality or ethnicity.

Third, Deprivation – the growing conviction of many, fuelled by rising inequalities of income and wealth, as well as the perception of cultural discrimination consciously practised against them by the ‘Liberal’-Elites, that they are losing out relative to others, and that the future for themselves and their children is not only diminished, but actually bleak.

Fourth, De-Alignment – the burgeoning gap, and therefore weakening bond, between rulers and ruled, between the traditional mainstream political parties and the people they purport (or even no longer bother even to pretend) to represent: manifesting itself in a much more fragmented, volatile and unpredictable politics.

Goodwin and Eatwell also show that, again giving the lie to the dismissive prejudices of its critics, the Populism movement is not anti-democratic. Its preference for properly representative democracy remains strong.

Rather, it opposes aspects of ‘Liberal’-‘Progressive’ democracy as it has evolved to date, and actually wants more democracy: more direct-democracy referendums and more-listening politicians who will devolve power to the people to exercise it democratically, instead of vesting it in what too often are unelected and unaccountable, bureaucratic and technocratic, economic and political elites.

Goodwin and Eatwell demonstrate, too, that neither is Populism “fascist”, as its belittlers and defamers claim, most notably near-hysterically in the aftermath of the Brexit and Trump victories and the strengthening electoral performance of anti-Establishment parties in Europe. The movement by and large does not seek to tear down failed institutions which turned anti-democratic and replace them with autocratic ones: but to repair them so that they once again serve the interests of those they are supposed to serve. 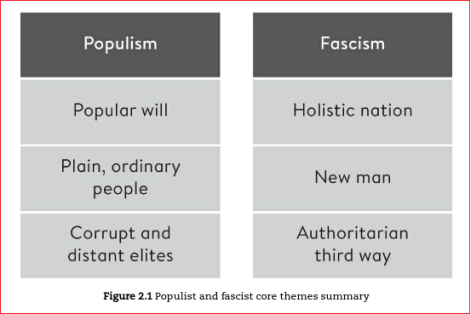 The authors argue, in my view correctly, that unless elitist ‘Liberal’-‘Progressivism’ acknowledges its shortcomings, it will fail to come to terms with the new Populism, and so will struggle to contain it. The omens are not good. That bastion of ‘Liberal’-Elitism, The Sunday Times, for example, has described it as one of most dangerous developments of modern times. Set against Nazi Fascism, Marxist-Leninist Communism and Islamist-Jihadism, that seems a curious way to describe a pleading by the denigrated and forgotten for the democratic settlement to recognise and accommodate their legitimate concerns more.

Conversely, however, if can bring itself to dilute its self-exalting smugness and intolerance, and broaden its appeal by meeting the legitimate concerns of voters who do want radical action to roll back elite-driven agendas in areas like welfare-universalism, mass immigration, rising inequality and civil liberties, it may yet accommodate itself to it.

I bought Goodwin and Eatwell’s book immediately on publication, but only over the holiday period has it been possible to go through it more slowly, in depth. I’d have no hesitation in recommending that you do, too.